Student Compostable Cup Business Takes Off Thanks to Pioneering Summer

Over just 10 weeks, 2 sophomores turn their idea into a marketable company 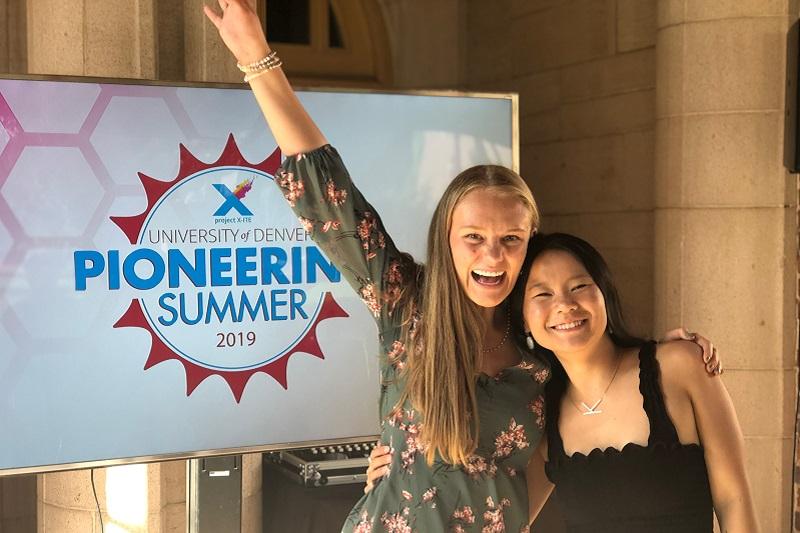 It doesn’t get much bigger than Denver Startup Week. Over the course of five days, the event, now in its eighth year, brings together more than 17,000 entrepreneurs, students and community members to learn, network and innovate.

In the middle of it all are Lauren Barnes and Kayle Migaki, University of Denver sophomores in the Daniels College of Business and Ritchie School of Engineering and Computer Science, respectively, set to pitch their burgeoning company, OneKindCup.

The ensuing five-minute elevator speech is the culmination of Project X-ITE’s Pioneering Summer, an accelerator and incubator that develops student startups. In its third year, the program put 19 students from eight companies through 84 hours of intensive programming and mentoring. On this "Demo Day," as it's known, each team will try to sell its product to a crowd of 200 investors, mentors, startup founders and community members.

The DU Newsroom followed Barnes and Migaki as they prepared for this day and developed their idea into a marketable product.

The familiar buzz of a networking event fills the second floor CiviCO headquarters in Cherry Creek. Young entrepreneurs in blazers and jeans chat at cocktail tables.

Barnes and Migaki are more comfortable standing together in the corner. They each look the part of a budding entrepreneur, dressed in stylish jumpsuits and heels. But they feel “nervous,” Migaki says, letting out a laugh. “But you’ve got to start somewhere, right? You can only go up.”

Migaki, the chief technology officer of OneKindCup, and Barnes, the co-founder and CEO, certainly don’t have a lot of experience to stand on. The sorority sisters just finished their first year at DU, but the duo has a strong vision.

The idea for a one-piece, disposable, compostable cup with built-in straw came to Barnes on a lunch date with her dad. She developed it in the introductory Gateway to Business course at the Daniels College of Business. By the end of spring quarter, she was onstage pitching it to Project X-ITE, which selected OneKindCup for Pioneering Summer.

Over the course of the program, Barnes and Migaki want to conduct market research, obtain a patent and test a design on a cup machine. But first, they must get through the pitch at the kickoff event. After a shaky few minutes in the spotlight, they retreat to their seats, knowing they can and will do better as they put in more work over the summer.

“Failing isn’t failing, even if this just turns to [crap],” Barnes says. “I feel like we still gained a whole lot. Just coming to stuff like this and being able to be involved is way cooler than I could have expected after my freshman year of college.”

Barnes answers the side door at a little house on the corner of York and Asbury, headquarters for Project X-ITE and its Incubator X, and the summer office space for the Pioneering Summer companies. OneKindCup’s headquarters is in an old bedroom. In addition to a stipend, access to mentors and a full slate of programming, each participating startup receives office space on the property.

To-do lists cover the 6-foot-tall whiteboard, and scraps of paper prototypes are strewn across a table and the floor. A collection of to-go products sits on the closet’s top shelf. Many of these cups, Chinese food containers and milk cartons will be deconstructed as Migaki and Barnes work to develop their own design.

“The first few days were rough,” Migaki admits of the pair’s new 9-5 schedule, but they agree the office experience is more motivating than regular homework or library time.

“I’m going to be honest, I was a little sad that it wasn’t going to be a typical summer lying by the pool,” Migaki says. “The more we continue on, I realize that this is actually so cool, and I would trade this every single summer to be able to actually do something and make progress on something that I care about.”

With Barnes out of town, Migaki is taking her first crack at pitching OneKindCup at a weekly practice session. In a Daniels College of Business lecture hall, program participants rehearse in front of their peers. Their peers, in turn, provide constructive criticism. Local businesspeople, serving as mentors, often sit in and offer advice.

“I think it comes with knowing your product better and figuring out what’s unique about it,” Migaki says. “My biggest takeaway was you’re not memorizing a script, you’re remembering bullet points. It made it a lot easier.”

Migaki credits some of her success to her peer mentor, Isaiah Silva, whose company, Atomata, has been through Pioneering Summer before. Project X-ITE intentionally matched fledgling startups with older, more experienced students.

After all, says Nina Sharma, managing director of Project X-ITE, “Everything was about building this community.” The emphasis on peer-to-peer mentoring allowed students from different disciplines to get to know one another and swap expertise. “This breaks down all those barriers and siloes.”

On a scorching July day, Barnes drives to a nondescript building in an industrial part of Denver that neighbors I-25. She meets Marc Hanchak, founder of LINK Product Development, who volunteered to mentor OneKindCup for the summer.

“I love the product,” he tells Barnes. “There’s some design challenges for sure and some manufacturing challenges, but however we can help, [we will].”

Over the next weeks, Hanchak and the OneKindCup team will meet for 10 one-hour sessions. As he would for any professional client, Hanchak will advise on the prototype, business plan, risk mitigation and marketing strategy, among other things.

“I really enjoy their enthusiasm,” he says of Migaki and Barnes. “They’re so eager to learn and wide-eyed. They’re not tainted yet. It’s so great to see them soak it in. Any advice I’ve given them, they’ve run with.”

On this day, a lot of the advice centers on talking to “real people” to conduct research on consumer and company habits. Already though, Barnes and Migaki have learned the value of face-to-face communication, through a full schedule of networking events.

“Going to these things and building those relationships is a lot of what this program is about,” Barnes says. “The more you practice talking to people, the better you get at it, and that’s going to totally transfer into sales.”

Migaki agrees: “It’s helped increase my confidence and this program beyond business and entrepreneurship has grown me as an individual.”

By now, Migaki and Barnes are feeling immersed in OneKindCup. So much so that they trade stories about how the venture has crept into every aspect of their lives.

While on vacation in Europe, Barnes saw a cleverly designed to-go cup in a restaurant window and bought it for research. On a trip to California, Migaki found herself questioning why the cups at Starbucks aren’t compostable. Plus, she brought her own cup to reduce waste. “It’s not like you go on vacation and take a vacation from your values,” she says, nodding to her passion for sustainability. “You practice what you preach with this stuff.”

“Like all things, you’re going straight and then you hit a roadblock,” Migaki says from the passenger seat as Barnes drives to Denver’s RiNo district.

OneKindCup has spent the week pivoting its design and its business model. Its founders are now considering a partnership plan, looking for a larger company to sell to.

“If we want this idea to take off ... then we need to pair up with someone who does have the resources and the time to take us on,” Migaki says.

The pair arrives at the headquarters of Havenly, an online interior design startup, and meets Lee Mayer, the firm’s founder and CEO. For the next hour, the Pioneering Summer cohort fires questions at Mayer and her executive staff, who offer advice about pay structure, marketing strategy and hiring practices. Company visits like these are a cornerstone of the program, introducing students weekly to successful entrepreneurs who were once in their shoes.

“People are just so willing to help and so kind,” Barnes says. “They ask, ‘How can I connect you? I love what you’re doing, let’s figure it out.’ Business is so much about people. The more people we get to see helps.”

The familiar buzz is back, this time in Reiman Theater on campus. Mentors, friends and families rise from their seats as the Pioneering Summer entrepreneurs stream in.

Barnes and Migaki enter, holding their laptops and a model of OneKindCup. “Look at that prototype!” Hanchak, their mentor, says as he greets them. “That’s what I’m talking about. I think it looks great.”

Soon, Barnes will take the stage and deliver a much-improved pitch. It's the final tune-up, of sorts, before the presentation at Denver Startup Week.

“When we pitched in Cherry Creek [in Week One], I felt like we were so behind, everybody was so good,” Migaki says. “And throughout the program, we’ve gained a lot of confidence and realized other people hit challenges too.”

OneKindCup achieved each goal it set before the program began, Barnes notes. The entrepreneurs have determined their product’s market niche, finalized a design, tested the cup on a machine and embarked on the path to securing a patent. Their mentor couldn’t be more impressed.

“It seemed like it was way more than a semester’s worth of development,” Hanchak says. “I’m not sure how they did it. They were working all the time and really focused.”

Sharma is proud too — of OneKindCup and of Pioneering Summer’s continued success.

“No aspect of this was easy,” she says. “Getting 19 independently thinking, entrepreneurial people to show up for 84 hours of programming is like the textbook definition of herding cats. But the fact that they all did it and believed in it — believed in the program and believed in each other — I’m just so proud of them. 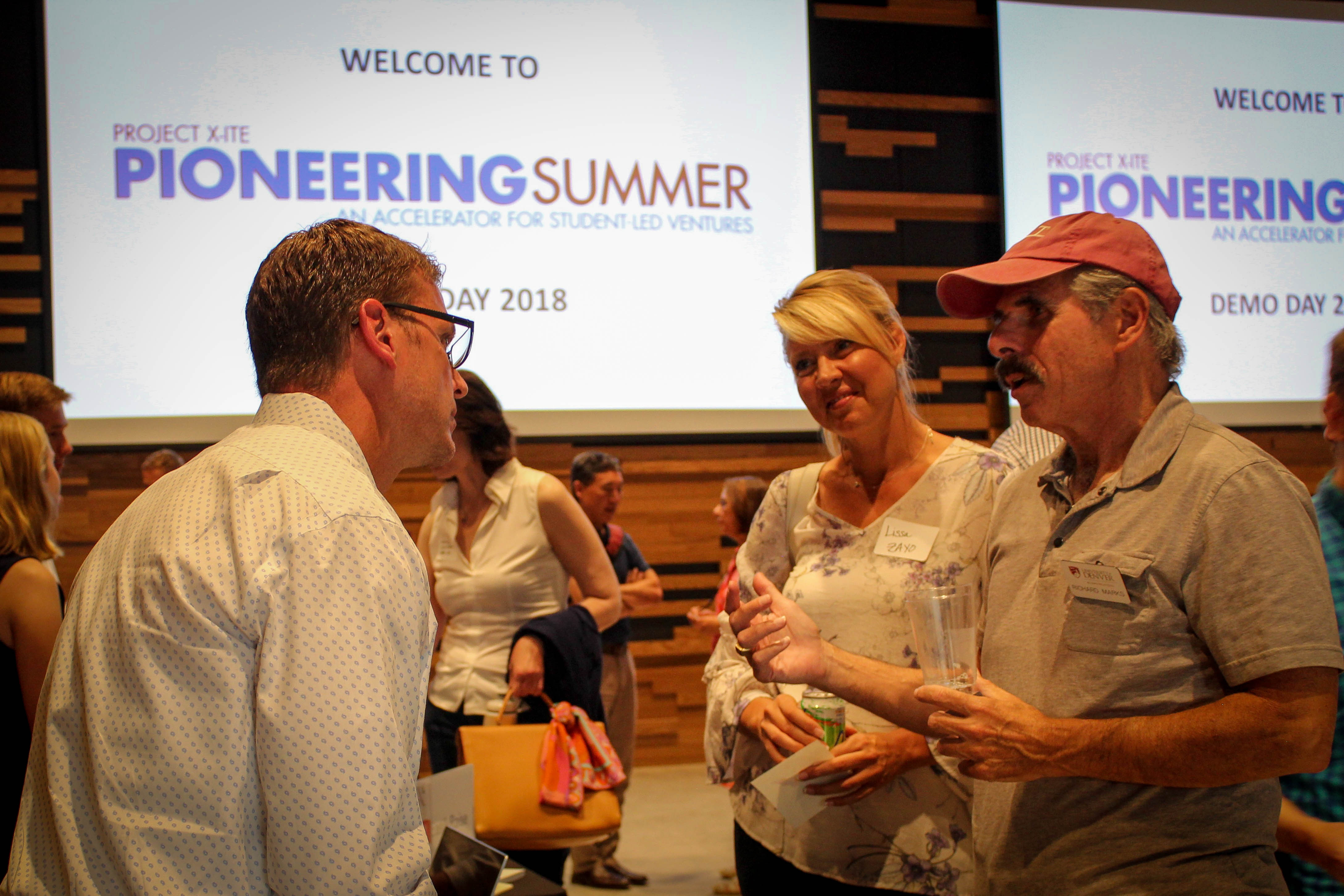