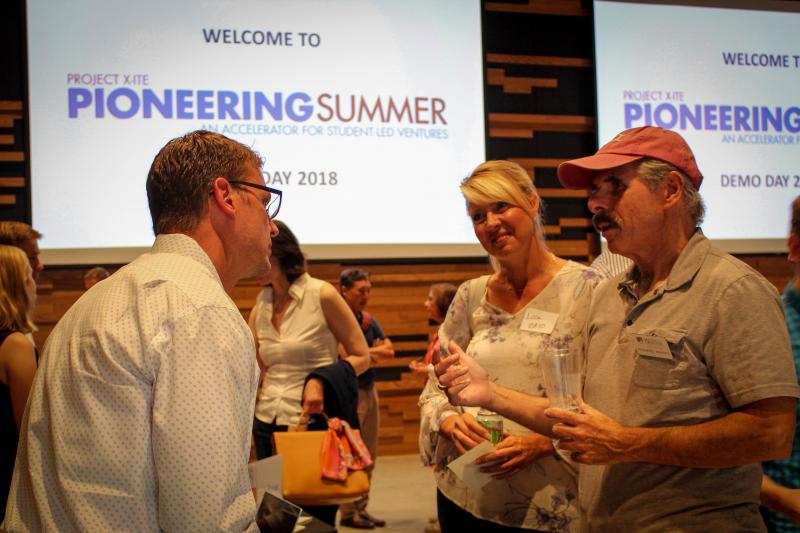 Following the call of a microphone, 30 University of Denver students flock to the front of the room, huddling around a figure who could easily be mistaken for a proud mother.

For the cohort of young entrepreneurs who have survived Project X-ITE’s Pioneering Summer, this culminating Demo Day event is a symbol of success. The participants — the brains behind nine student-created companies — have survived 10 grueling weeks of a challenging business accelerator. Now, in front of friends, family and potential investors, these future business leaders will pitch the companies they have spent their summer vacation developing and nurturing.

“I think the coolest thing to see is that … all of [the students] are doing something slightly different than what they set out with,” says Sharma, managing director of DU’s Project X-ITE, cross-disciplinary hub for innovation, technology and entrepreneurship. “I think that’s so cool because it’s just the nature of entrepreneurship. They’re all pivoting and learning from their mistakes and failing fast and becoming better entrepreneurs and better leaders because of it.”

Now in its second iteration, Pioneering Summer has more than tripled its numbers. Where just eight students gathered the year before, 30 eager entrepreneurs have convened to fine-tune their business plans. Provided with access to workshops, field trips to local businesses, a stipend for housing and $5,000 to build out their fledgling companies, each team devoted at least 20 hours each week in the incubator and 20 hours per week in an internship of their choosing.

For Marty Katz, executive director of Project X-ITE, there is no better way to take a great idea to market. “The idea is that if we provide them the time and the space and the resources to build their own businesses, two things are going to happen that are great,” he says. ”One is they’re going to learn a heck of a lot. And the other is sometimes, just sometimes, and maybe more often than you think, they are going to succeed and build something really special.”

Most of the companies were brand new or in their infancy. Ben Pantilat and Lauren Agee, for example, started this summer with little more than an idea. After two-and-a-half months, their organizational fundraising company, Easily Raise, has a small pool of users and is working on a web application.

For more established enterprises like PocketChange, which facilitates charitable donations through Facebook, Project X-ITE’s program provides a chance for full-time focus on development. After its second go-round at Pioneering Summer, PocketChange was able to secure seed funding from a local venture firm, which “marketing ninja” Christian Dooley says means the company he co-founded is almost ready to go global.

“I think this is the most excited I’ve ever been,” he says, waiting to show off his technology at one of the booths bordering the presentation space. “I’d say last year we had this big idea, and we started working on it and came to a lot of the roadblocks we needed to get through. This summer was a lot of actually doing: building product, putting it out, getting user feedback and actually furthering productive output. It’s a massive shift.”

As the students make their pitches, Drew Lawrence (MBA ’13) smiles from the audience. The vice president of client solutions at The Ash Group is one of 45 volunteers who mentored several of the groups this summer. Each team counted on its own eclectic mix of community experts to advise and guide them by way of structured check-ins and less formal conversations.

“Really that idea of building that [business] community, giving back to the community, giving back to my school that I’ve gotten so much from is what really drove me to do it,” Lawrence says. The ability to relate and the opportunity to set students up for success have has been rewarding, he says, but, “we get something out of it, too. I learn as much from these guys and girls and teams and companies I think than they probably learn from me, quite frankly. It helps me know what’s going on, it helps me understand the changing dynamics of the workforce in my current professional position.”

In Sharma’s eyes, the continuing collaboration both on and off campus makes all the difference. “I think it says that we are definitely on to something,” she says. “There is a real hunger, a real desire for entrepreneurial work and for venture accelerators in Denver and for students especially. And the number of mentors that have come out of the community just demonstrates how collaborative we really are.”

The following ventures presented at the 2018 Pioneering Summer Demo Day: