Researchers to Benefit From Consolidation of Late Congressman's Archives

An agreement between DU and CU brings collection together 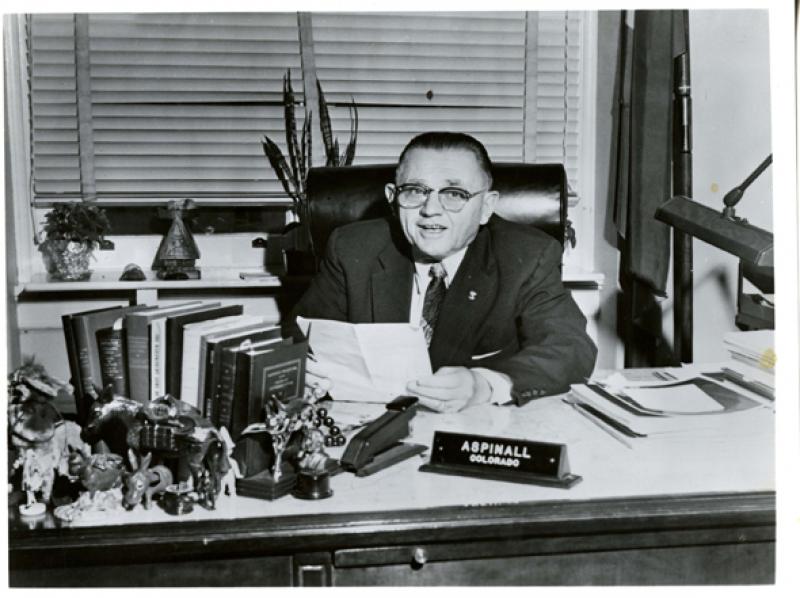 In September 2019, just as summer was slipping into fall, archivists at the University of Denver and University of Colorado Boulder dotted and crossed the last perpendicular vowels and consonants on an unlikely merger.

That’s when, after some weeks of negotiating formalities, the University of Colorado Boulder Libraries’ Archives transferred its 53-box collection of papers from the late Congressman Wayne Aspinall (BA ’19, JD ’25) to DU’s stewardship.

The transfer — rare in the world of amassing and conserving important papers and artifacts — fleshed out DU’s existing 183-box collection, given to the University after Aspinall left office. No longer split between institutions, the collection can now be easily accessed by people who want, say, a better understanding of the Colorado congressman’s often controversial positions, insight into his constituents’ concerns, or an insider’s view of the legislative process related to the causes the DU alumnus championed and contested.

Just who was Aspinall? Kate Crowe, curator of Special Collections and Archives at DU, describes the former Democrat from Palisade this way: “He was reflective of people in rural areas who feel that metropolitan areas have too much say, [while] they’re not heard. He wanted to be the voice of people who were on the Western Slope.”

Today, Aspinall is known for his focus on water and land issues and for his feisty opposition to what was then the emerging environmental lobby. He served in the U.S. House of Representatives from 1949–73 and died 10 years later. After his death, his family decided to send the last of the congressman’s papers — mostly documents related to his life after he left Washington, D.C. — to CU Boulder rather than DU.

The consolidation of the Aspinall papers does not just represent a boon to scholars and students, Crowe says; it also reflects a different philosophical approach to how valuable materials are managed and put to use. Where once archivists may have taken pride in the sheer number of collections in their purview, now they are increasingly inclined to consider how the materials can best serve scholars.

“Anything that makes researchers lives easier makes me happy,” Crowe explains. “It makes no sense for someone to have to go to three or four institutions to look at [one person’s] set of papers.”

Megan Friedel, head of archives at CU Boulder, echoes that sentiment. It was CU that jump-started the merger of materials.

“We were really thinking primarily about users, about researchers, about how people would go about accessing information about Wayne Aspinall. It didn’t make sense from our perspective to have his collection divided between two repositories, because it would mean someone looking for material on the latter half of his life would have to go to CU, while someone looking for material on earlier aspects of his life, they would be going to DU. For us, it was about reuniting the collection, and it made the most sense for it to be at DU.”

Making that happen involved hours of legwork. First, Friedel and her team had to confirm that the plan was OK with Aspinall’s descendants. That meant contacting every Aspinall in the phone directory until they found his granddaughter. Once she endorsed the plan, it was a matter of preparing the paperwork to deaccession the collection from CU and arranging transport via van and truck to DU’s archives.

While the combined collection makes life easier for scholars, it also makes the classroom experience richer for DU history students eager to experience the trials, tribulations and triumphs of archival work.

“One of the great joys of being a history student is finding and working with primary sources, but researchers often find it really challenging the first time — or few times or many times — they have to do those things. So the more opportunities new researchers get to practice, the better,” says the Department of History’s Hilary Smith. She team teaches a course that requires students to venture into the archives to explore primary sources.

In a recent iteration of that class, she explains, “The students were expected to produce a 12-page research paper on a topic in the area of the history of health, disease and medicine, crafting their own original argument based on sources from DU’s Special Collections, among them the Aspinall archive.”

Some students focused on the politics of health insurance and environmental protection in the 1960s. “For them, the Aspinall papers were useful as a lens onto Colorado politics of that era. One student wrote his paper on the Rocky Flats facility outside of Denver, which produced parts for nuclear weapons for decades up to the early 1990s. By looking at correspondence such as interoffice memos in the papers of Congressman Aspinall, [this student] was able to compare what was being said publicly about safety at the site and what was being said in less-public venues.”

Regardless of the particular topic they tackled, students benefited from sifting through the vast array of materials that confront any historian trying to discern the nature of events and debates.

“It’s often simultaneously humbling and empowering for students to do work in the archives,” Smith says. “Humbling because it helps them realize how spotty and limited the primary-source record can be, and how difficult it can be to make coherent sense of the fragmented records they find in an archive — not to mention that the coherent story that does come out of those fragments sometimes challenges or undermines what they used to believe. But it’s also empowering because students realize that they are doing the real work of historians; they may be looking at documents that hardly anyone else has ever seen, and they can make discoveries and raise questions that are completely new.

"That’s really thrilling," she adds, "both for the student and for the teacher.”