Q&A: Navin Dimond On His family's $5 Million Gift to the University of Denver 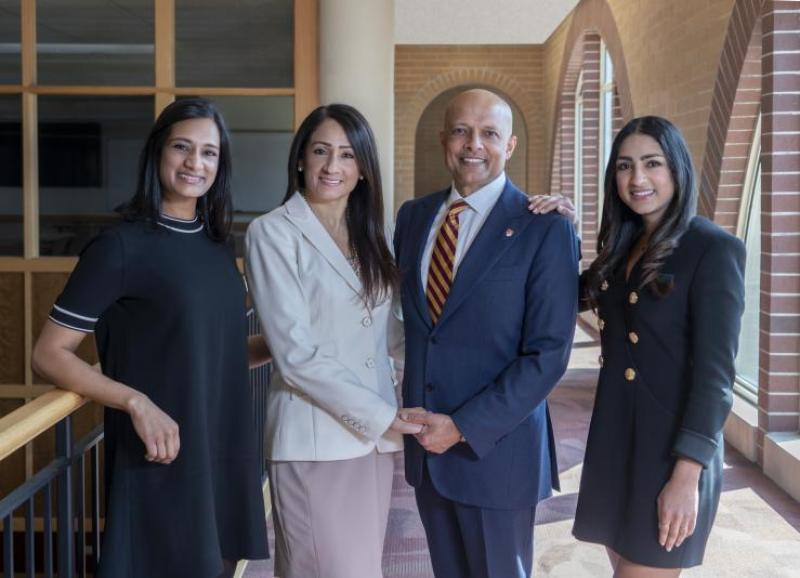 Higher education was never part of the plan for Navin Dimond (MBA 1986). His parents emigrated from India to London, where Dimond was born, and no one in his family had graduated from college. He never imagined that he’d be where he is now: the founder of a hospitality powerhouse with three degrees and a close connection to the University of Denver.

On March 25, the University of Denver celebrated the groundbreaking for the Dimond Family Residential Village, one of three planned buildings under way as part of the University’s Denver Advantage Campus Framework Plan.

Thanks, in part, to the Dimond Family Foundation’s $5 million gift to the University, the Dimond Family Residential Village will stand as a testament to the importance of education and connection. The DU Newsroom spoke with Dimond about his relationship to the University and why his family, including wife Rita and daughters Ashley and Sonja, decided to make this gift.

The following remarks have been condensed and edited for clarity.

You and Rita founded Denver-based Stonebridge Companies in 1991, after you earned your MBA from DU. How did the two of you decide on this career path, and what do you love about it?

The company was not initially intended as a hospitality company. It was intended as a service company for real estate gone bad, so to speak. This was in the days when the Resolution Trust Corp. was formed by the federal government and the FDIC owned a lot of property. There was a big need for service providers. At the time, I didn’t have any capital. There was no money, but you had the drive to go work. Probably within 14 or 15 months of starting the company, we ended up buying a hotel. It wasn’t the intent. It wasn’t the plan. But this opportunity arose. Fast forward and the company transforms into a hotel company, and 100 hotels later, we’re still perfecting the craft. I consider myself an accidental hotelier.

It's the formation, the idea, the initial conception of a project. We’ve built some 70-plus hotels from the ground up around the country. What’s the thesis? What’s going to work here? What brand should it be? What style should it be? What level should it be? What should the décor look like? All of those things — the planning — I really enjoy. Ultimately, it’s about that person who lays their head on the pillow and gets a great night’s rest.

How did you choose DU for graduate school?

I actually ended up being an assistant to the executive MBA program. There were classes on Fridays and Saturdays, and my job was to be a glorified gofer: Set up the class, bring the doughnuts in, set up the coffee, the juice, the books so the students were ready. That gave me $800 a quarter, and it gave me a pretty substantial discount on my tuition to do my MBA.

Tell us more about your time at DU. What inspired you to continue giving back and getting involved?

I think it was mostly [former Board of Trustees chair] Joy Burns and [Chancellor Emeritus] Dan Ritchie. I knew them from some other areas and had Joy telling me a number of times, “You need to get involved. I’m going to get you involved. I need you.” That’s how it started. That was probably 10 years ago. I’m one of those people who wants to give back to those who have given to me, whether it’s institutions or people or situations. And it’s a place that didn’t give me anything for free, but it did give me the opportunity.

DU has several new buildings planned for the near future. Why were you and your family drawn to support the first-year residence hall in particular?

I’m a big believer in residential education. When students go away to college, it’s the first time they leave home in a meaningful way. It’s a complicated time in their lives, and [that first year] is also the time when we lose many of our students, or have a high probability of something not working out. Can we create a culture and a place where we can improve the [dropout] rate and increase the persistence rate? That to me is powerful. And then there’s the memories that are created when you’re in dorms in that communal living with your fellow schoolmates. There’s a special creation of memories in the dorms, and it’s an integral part of life and growing up. It can’t just be a building.

Was that a formative experience for you when you were an undergraduate?

It was indeed. I grew up in London, and I went to Washington State University for my undergrad. Imagine that. I knew nobody. To this day, I remember my dorm room number. It was 227 Waller Hall. That was my freshman dorm. And I remember a number of people who were there and are still my friends today.

Your entire family is part of this philanthropic commitment to DU. Can you talk about how special it is to have your daughters, Ashley and Sonja, as a part of this gift?

That’s one of the more powerful things. We are probably a little bit of a different family in terms of how we think and do things. If someone is going to say a few words at a groundbreaking ceremony like this, usually it’s going to be the patriarch who says something. Well in this case, we wanted it to be our children. They are the future. I want them to be really engaged with philanthropy. It’s a closer connection to a student, to a dorm, to someone who is young. It’s hard for me to articulate, but there’s something there deep down that is very special about what we are doing, how we are doing it, who we are engaging and how my children can learn. They will remember that forever and hopefully continue to pay that forward in their lives long after I’m gone.

As one of the University’s trustees, you chair the buildings and grounds committee. Tell us about the legacy you wish to leave during your time in this leadership role.

I grew up in such a different place. I never even dreamed of thinking about my legacy. I think it’s a legacy where long after you’re gone, when someone thinks about you or talks about you, it’s in the spirit of generosity and thoughtfulness and future-thinking. I tell this to my children and occasionally others: You’re driving your car, and mile after mile, the road just keeps appearing, keeps appearing, keeps appearing so you can get to where you need to get to. That road was planned, designed, maintained, engineered and funded so you have the beautiful pleasure of driving on it. We take it for granted that somebody long before me did this. I am just going to do my little piece to pay it forward.

Mentorship is very important to you. Is there someone who has inspired your own development?

I never had a mentor per se. The only persons I looked to — and it wasn’t even in an explicit way, but more sort of an intrinsic way — were my parents. I saw my father wake up really early every morning and go to bed late, working with his hands and working truly hard. I just grew up around that. They didn’t have to say anything or do anything. I just saw them. To me that’s really what inspired me. That was always inside me.