Projects Across DU Benefit from Record Day of Giving 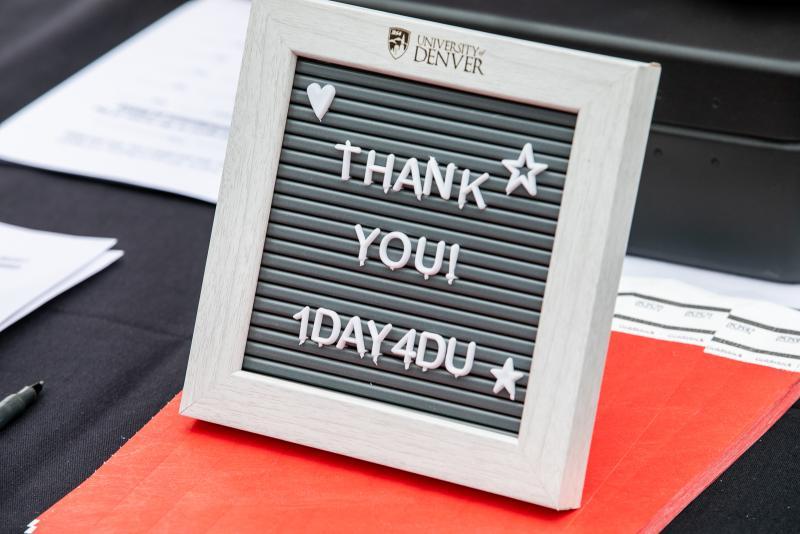 The University of Denver global network of alumni, students, faculty, staff, parents, families and friends united for a record-breaking day of giving on May 22, smashing goals and in the process providing support to vital programs and initiatives making a difference in the community.

Now in its fifth year, 1Day4DU is traditionally the University’s largest single day of giving. Responding to the 1Day4DU campaign, DU community members from nearly every state and multiple countries gave in record numbers to projects across the campus, both online and in person.

The latest counts show that more than 4,000 donors contributed over $2 million to 34 crowdfunding projects and 160 other areas of the University, providing meaningful impact for the future of vital community programs at DU. This year’s 4,000-plus donors far exceeded the goal of 3,200 and nearly tripled 1Day4DU’s first year, signaling the strong support of the DU community.

The 34 crowdfunding projects featured during 1Day4DU spanned some of the University’s highest priorities. Scholarships for first-generation students, Native American student support, varsity athletics, club sports, the Learning Effectiveness Program for students and Summer Internship Awards represent a few of the initiatives that garnered support during the day. Some of the projects that participated in 1Day4DU for the first time included the Innovation Labs, International Humanitarian Crisis Simulation, DU Emergency Medical Services, Collegiate Recovery Community and University Library Association.

The gifts made on 1Day4DU will have direct and immediate effects on the students involved in those and other projects, as well as on DU’s community collaborations like MotherWise Colorado and the Bridge Project’s Early Literacy and Writing Program that were also highlighted during the day of giving.

“During 1Day4DU, the University of Denver community showed up powerfully to support our students and the many ways that DU makes a difference across our community,” said Armin Afsahi, vice chancellor for Advancement. “We are immensely grateful for all of the alumni, trustees, staff, students, faculty, families and friends who joined us in advancing so many innovative projects during that special day.”

Social media, telephone outreach and online giving provided opportunities for alumni and friends around the world to get activated and play a part in building the future of 1Day’s projects. Alumni from as far away as New Zealand, United Arab Emirates, United Kingdom, Alaska and other places made gifts in support of the causes that held the most meaning for them. The University’s trustees also played a significant role in 1Day4DU, once against getting behind the day with 100% participation.

1Day4DU featured not only digital and telephone outreach to activate the DU global network but also an exciting on-campus event. The on-campus festivities drew more than one thousand people to Carnegie Green for food, live music, carnival activities and the opportunity to converse with the project leaders whose programs benefited from the event.

The festivities of 1Day4DU followed the excitement of Alumni Weekend happening just a few days prior. Alumni traveled to campus to celebrate and welcome graduating students into the alumni family during Alumni Weekend, and that engagement of the DU community paved the way for record-breaking support of students on 1Day4DU.