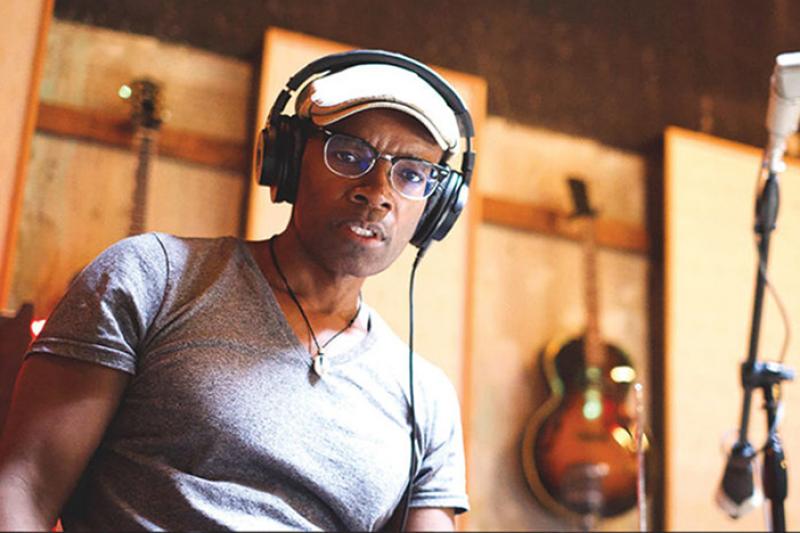 This article is half of a two-part alumni spotlight in the fall issue of University of Denver Magazine. The second profile features alumna Lilly Hiatt, who released a new album this spring.

At least twice a year, the packages would arrive on a doorstep in Denver’s Park Hill neighborhood. Rudy Royston, just an elementary school student at the time, was always eager to open the Texas-postmarked parcels.

Inside lay the building blocks for a college degree, a full-time job and a career as a professional musician: rhythm sticks, bongos, triangles, glockenspiels, tambourines.

“It didn’t feel like there was a point where I decided to do music,” says Royston, a New York-based jazz drummer who released his new solo album, PaNOptic, in June. “I’d always done it.”

The instruments came from his dad, who mailed them from the RBI Music factory where he worked (and suffered an accident that left him a hook for a hand). “It felt weird if I didn’t see those things at age 7,” Royston says, remembering his confusion when he would visit a friend’s house. “Like, ‘Don’t you have a marimba? Why isn’t there stuff around?’”

Church put Royston behind a drum kit, but his four older siblings helped tune his tastes in music. Denver’s vibrant music scene filled in some blanks, while visits to his dad and white stepmother introduced Led Zeppelin, Space Cowboy and country. But Royston, who is Black, was always drawn to jazz.

“It was the one thing that I could actually do where it was OK to have my own voice,” he says. “What can you do? What do you want to do? In jazz there’s just empty space in front of you. You have to create something right there. The challenge is that it’s all me with some language that I’m using from its history.”

Royston built his vocabulary through high school and eventually transferred to DU’s Lamont School of Music on a full scholarship. At Lamont, the jazz man decided to study classical percussion.

“I wasn’t saying I wanted to play jazz or classical,” Royston explains. “I was saying I wanted to play anything that is beautiful music.” And so, Royston plunged into a lush world, playing in the jazz band and the symphony, and taking classes in opera and poetry, the latter of which became a second field of study. Like music, he noticed, poetry has a rhythm, a melody and a feeling.

“DU taught me how to expand all of [the skills I learned in church] and make it something that everyone can understand,” Royston says. “I had this natural musicality to my playing, but then when I got to DU, I had to refine it and shape it and control it.”

His dexterity on drums is on full display on PaNOptic. The collection of solo recordings pays tribute to his inspirations and influences—from Langston Hughes to the Beatles to John Coltrane to Gwendolyn Brooks to the pastor’s wife at his childhood church.

Royston wasn’t intending to make an album; he just wanted to play and let his sticks take the spotlight.

After sitting on the mastered recordings for five years, Royston knew this was the right time to release PaNOptic. With artists around the world struggling to find work during the pandemic, he is donating 100% of the proceeds to the MusiCares COVID-19 Relief Fund.

“We’re all in this together, you know?” he says, speaking of the pandemic and the amplified movement for racial equality. “The record is about small moments of enlightenment and awareness and then playing that. I think now we’ve entered this moment of awareness in the country that we can grow together from. What better time to be better human beings?”