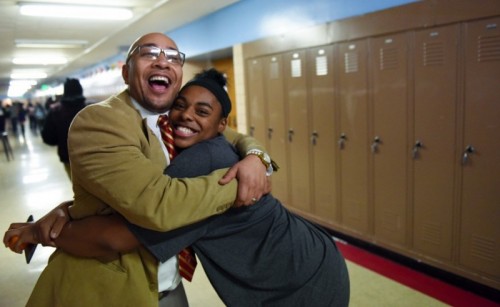 Theologian and philosopher Albert Schweitzer said, “Success is not the key to happiness. Happiness is the key to success. If you love what you are doing, you will be successful.” For Nickolas Dawkins (EDD ’10), happiness comes in educating others, and success has followed him along the way.

A graduate of the University of Denver’s Morgridge College of Education, Dawkins has spent the past several years leading schools in the Denver area, including South High School, Thomas Jefferson High, Martin Luther King Early College, Hamilton Middle School and Manual High School. His leadership has led to academic growth, while showing students that they’re more than just a number.

“My signature is happy schools and happy kids, and [having]diverse teaching staffs and teams of educators that help kids thrive and feel inspired to be their best,” says Dawkins, who earned a degree in educational leadership while at DU. “I love to see kids learning and defying the odds.”

His approach to leadership is paying off. During his time as principal at Hamilton, the school had some of its highest academic growth during Dawkins' career and was able to help close the achievement gap by supporting teachers and creating a rejuvenated school community. It’s a period Dawkins refers to as Hamilton’s “Renaissance.” He’s taken that same approach into his current role as principal at Manual.

“Leading at Hamilton was so special,” says Dawkins, who has spent more than 16 years working in Denver schools. “At Manual, we are doing the same. We are still moving the needle on academics, and every day we try to bring the light, laughter and love to a school that is near and dear to the city’s heart. I love to see kids learning and defying the odds.” 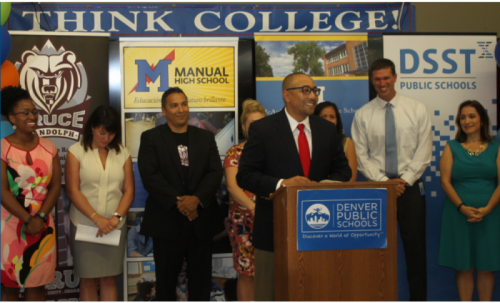 At Manual, Dawkins says, more scholars are attending four-year colleges, and during the school’s first year it had the highest School Performance Framework (SPF) growth of traditional high schools. Additionally, Manual was one of 14 schools that had increases in every area assessed overall in the ACT. Literacy growth is up this year, the school has seen double digit growth in math for the Colorado Measures of Academic Success (CMAS) assessment, and PSAT status gains are strong.

With success have come many challenges, including overcoming decades-old mindsets within the education system.

“[I’ve had to overcome] the mindset that students from certain ZIP codes and backgrounds can’t achieve at a high level, and the mindset that prioritizes adults over students,” Dawkins says. “I am thinking a lot about being a system disruptor and not going with the currents of reformers who really don’t understand the kids and communities they want to reform.”

Disrupting the system to make it better is part of values driven leadership, something Dawkins learned about at DU. This strategy, combined with the assortment of educational tools he gained at Morgridge, helps guide Dawkins’ leadership today. Even with all the success Dawkins has had as an education leader, he’s not allowing complacency to deter his goal of making Manual and the system better.

Dawkins says there is still more work to be done, including changing the way schools track students and families, particularly the working poor, into pre-determined outcomes; a stronger focus on special education; addressing disproportionality for students of color; and making more resources available to students who are not entering or playing on a leveled field.

In the end, it all comes back to Dawkins’ pursuit of happy schools and happy kids.