Working for another university, Hitoshi Sugie is passing his love of DU on to the next generation 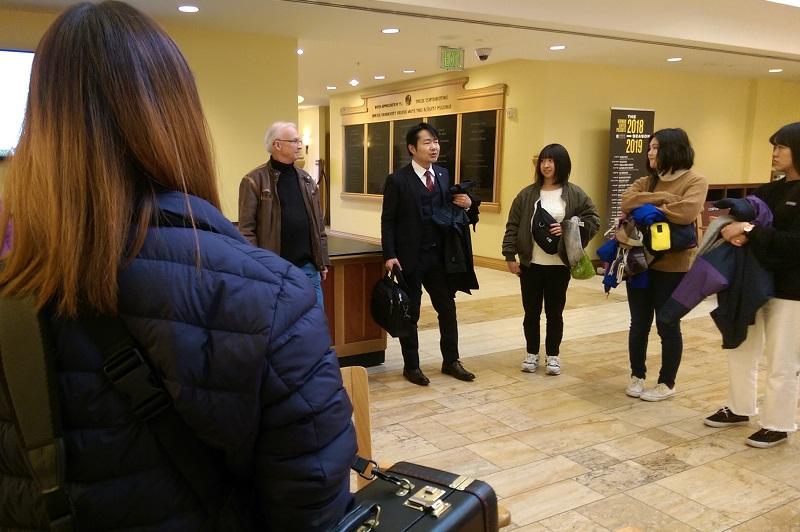 Whispered oohs and ahs ricochet through the June Swaner Gates Concert Hall. A dozen Japanese students have just entered stage right and are basking in 575 watts of warm, soft light. Dwarfed by the largest performance hall at DU’s Robert and Judi Newman Center for the Performing Arts, they exchange excited glances with their friends and look toward their chaperone, an administrative lawyer in a three-piece suit.

On the outside, Hitoshi Sugie’s expression is starkly calm. But inside, he confesses, “I got kind of nervous,” walking onstage. “I remembered how I felt.”

These days, Sugie is on staff at the Nagoya University of the Arts’ International Exchange Center, which uses exchange to build connections with institutions around the world. And for this particular trip, he is introducing his students to the campus he knows best. After arriving at the University of Denver’s English Language Center (ELC) in 2001, Sugie (BM ’06) took his trumpet to the Gates stage, where, as a student at the Lamont School of Music, he gave countless performances en route to his degree.

“It’s a second home,” Sugie says of Denver in general and of DU in particular. “I’m proud of it. I want to show it off. They are such excellent facilities.”

For two weeks this winter, the Nagoya students got to see Sugie’s alma mater for themselves when the Learn English at DU (LEADU) program, an ongoing partnership with the ELC and two Japanese universities, welcomed them to campus. Upon arrival, they balanced English classes with experiential learning, explored Denver and mingled with DU students in social and academic settings.

But the truly unique aspect of the program is its personalization, according to Franklin Pesantez, the ELC’s assistant director of international enrollment management.

“It’s tailored toward the interests of the university students,” he explains, “whatever their fields of study and whatever their background is.”

The Nagoya students, for example, all come from majors like education, music, design and art. As such, their itinerary featured visits to museums and the Santa Fe Arts District. On two occasions, the students visited elementary school classrooms to exchange culture and observe the American educational system.

In contrast, students from the STEM-focused Tohoku University visited the Daniels College of Business and the Innovation Floor at the Daniel Felix Ritchie School of Engineering and Computer Science.

“I think my favorite part of the program is to see how they build their confidence,” Pesantez says. “I think it showcases our flexibility and how we can meet the needs of students, especially for students who want to discover more about American and academic culture. ‘How can we put a program together to meet your specific goals?’”

Strong connections with a diverse coalition of academic units on campus certainly helps, he adds. But so does having someone like Sugie, who, in addition to coordinating the exchange, serves as a living, breathing example of what DU’s programs can accomplish.

Knowing almost no English when he arrived, Sugie built his confidence through nine months at the ELC. The bond he formed with professor Al Hood (whom Sugie refers to as his “second father”) and former Lamont director Joe Docksey (his “hero”) convinced him to continue his education. And since his graduation, the DU experience has provided far more opportunities than Sugie ever could have anticipated.

“Without an education at DU, I couldn’t have become an administrative lawyer,” he says. “DU taught me how to study. I could study in completely different areas: music and law.”

As their time on campus drew to a close, Sugie noted, many of his students didn’t want to go back to Japan. They were fascinated by American culture, eager to learn from DU students and able to embrace the commonalities that surface from an educational exchange.

“I think [universities] can benefit from each other,” Sugie says. “If we send our students here, they will learn a lot. I’m proud to be a part of DU.”