Exploring the potential of carbon nanotubes 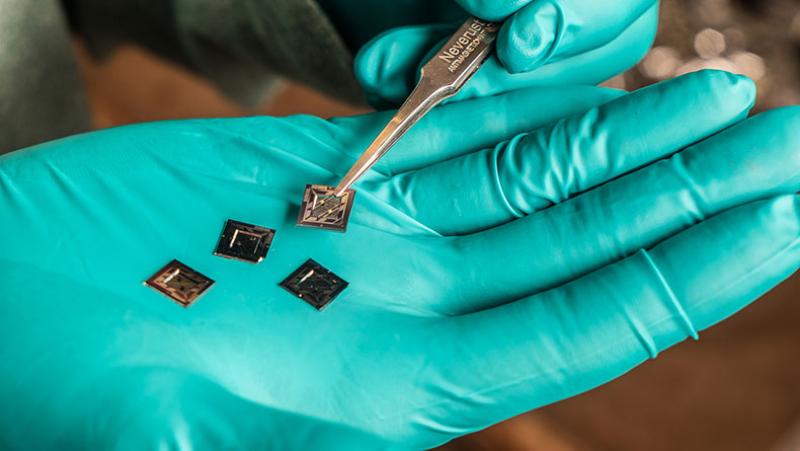 Carbon nanotubes may be strangers to most, but for University of Denver alumna and physics pioneer Azure Avery, they hold the magic of a pink, feather-light sugar nest disappearing on a child’s tongue for the first time.

“When raw, [carbon nanotube material] is sort of this really soft, black, sooty-looking cotton candy,” Avery says. Those aren’t technical terms, and they don’t reflect the depth of Avery’s subject-matter expertise, but they do say a lot about her approach to physics.

For Avery, the world of physics is Disneyland, and carbon nanotubes are her favorite ride. In the handful of years since she earned her PhD in physics from DU, Avery has spent her time exploring the potential of the tiny tubes through a collaboration involving DU, Metropolitan State University of Denver, where she is an assistant professor, and the National Renewable Energy Laboratory (NREL).

Although she had wanted to be a physicist early on — even beginning her undergraduate studies as a physics major — unexpectedly confusing coursework soured her relationship with the discipline. “Nobody told me that this was a class unlike any other class I had had before,” Avery says. “You’re learning to think and problem solve in a very different way than you’ve ever had to before. That was part of the difficulty. I didn’t know that, so I thought the problem was me, and I thought I just wasn’t smart enough to do it.”

So she quit. Avery took up psychology instead and earned her bachelor’s degree in that subject before eventually taking a job at Xerox. Her love of physics became a hobby, relegated to the back burner only to be reheated and enjoyed with the latest headline about space discoveries or exciting events at the Denver Museum of Nature and Science. Eventually that pull became too strong to ignore.

While plenty of others dance with the idea of reinventing themselves, Avery allowed physics to sweep her off her feet. “I knew what my passion was,” Avery says. “This was me going back and saying ‘I’m not going to let anything keep me from doing this this time. I know I can do it, and I am going to make sure I do it.’”

At age 30, Avery went back to school and earned her bachelor’s degree in physics, followed by a master’s degree. When it came time to pursue doctoral studies, she enrolled at the University of Denver, where she found a home in Barry Zink’s lab cutting her physics teeth.

Avery returned the favor too, says Zink. “She was my second graduate student and she had a huge impact on the stuff we were doing, and the things we are still doing,” he says. According to Zink, Avery’s thesis work was instrumental in establishing DU’s reputation in the field, and her bright personality has had a lasting effect on the department. “She is both relentless and relentlessly positive,” Zink says. “I think [Avery] was a huge helpful presence to get the culture of the department to be pushed in a good direction.”

After completing her PhD, Avery settled into a postdoctoral placement with NREL, where she joined an elite group of prominent researchers focused on building knowledge and solutions around sustainability and energy efficiency.

Today, as an assistant professor working with undergraduates, she approaches teaching with the goal of keeping students from the same frustration she encountered early on. “I try to warn them that this class is going to be different,” Avery says. “I also try to use different techniques for learning in my classroom that I was never exposed to.” One of the keys to instilling a passion for physics in her students, Avery says, is connecting the concepts and equations to the real world. So, between slides on classic lessons like Newtonian laws, Avery slips in golden nuggets that let students hear the sound the sun makes or watch spiders use electric fields to fly.

When Avery isn’t teaching, she’s learning. Through a continued partnership with NREL and DU, Avery is further exploring the carbon nanotube. Since pioneering a method for measuring the thermoelectric properties of nanotubes, Avery has spent the last few years digging deeper into the material’s potential as an effective organic thermoelectric.

“There are so many knobs to turn because there’s not just one type of carbon nanotube. There are single-walled and multiwalled, but then there are different-sized nanotubes, which have different properties. Some of them are metallic,” she says. “There are a lot of different pieces to try along the same little idea.”

Small though they may be, the “spaghetti-like” carbon nanotubes are full of potential and have certainly captured the curiosity of the scientific community. Already, Avery has seen them used to create jackets capable of using body heat to charge cell phones. In the coming years, she expects to see a carbon nanotube envelope that can harness heat waste created from outdated appliances, like, say, air conditioners.

Driven by an insatiable appetite for solving pressing problems, Avery cannot get enough of her job. “I get to put together systems. I get to do wiring, and I get to actually build things. I get to go into a machine shop and make parts if I want to,” she says. “It’s very interesting, and it’s never what you expect. It always throws you a curve ball, and it’s never going to work when you want it to. It’s always going to break when you don’t want it to. I just love to do things and see what happens and try to figure out what’s behind what I observe.”