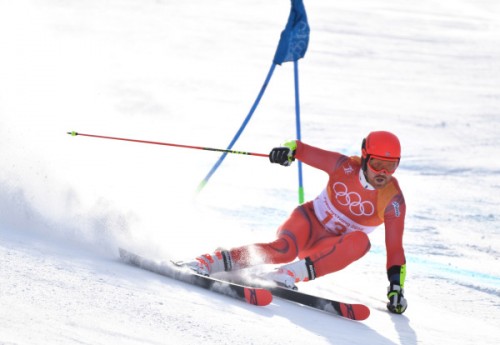 Former University of Denver men's skier Leif Kristian Nestvold-Haugen concluded his Olympic games in Pyeongchang, South Korea with a spot on the podium. He won all four of his match-ups to lead Team Norway to a bronze medal in the debut of the alpine skiing team event on Saturday at the Yongpyong Alpine Centre.

The team event featured 16 teams of four athletes (two men and two women) arranged in a bracket-style, single-elimination format. A skier from each of the two competing nations raced down the course in a series of head-to-head slalom races. If the countries split the two head-to-head match-ups, total time was used as the tiebreaker.

In the round of 16 of the team event, Haugen defeated his opponent by 0.91 seconds, turning in a 19.55 down the hill to cap off a 4-0 sweep over the Olympic athletes from Russia. Norway shook-up its lineup in the quarterfinals, placing Haugen in the second run slot, a match-up he won by 0.62 seconds with a 19.91, leading his team to a tie-breaking 2-2 win over Great Brittan.

Haugen won his third-match-up as well with a 19.62, but it was the only point picked-up for Norway, who fell to silver-medalists Austria in the semifinals, 3-1. The former Pioneer once again led his team in the medal round, clocking in at 19.69 in the anchor leg to beat his opponent by 0.31 seconds to take Norway past France in a tiebreaker by a combined time of 0.12 seconds for the bronze medal.

Earlier in this Olympics, Haugen finished eighth in the men's giant slalom and 13th in the men's slalom. This was his third time competing in the Olympic games.

"I'm planning on doing it (skiing) after I finish my degree as well, and we'll see how far I can reach. Hopefully I can be a medalist and get on the podium one day." Haugen said in an interview with DU's Daniels College of Business in 2011. Saturday, Haugen achieved that dream.

Before returning to the opening day of the 2018 Rocky Mountain Intercollegiate Ski Association Championship, current Pioneer Andrea Komsic made her second Olympic appearance with a 32nd place finish in the giant slalom and a 31st place finish in the women's slalom.

Troy Terry was back on the ice for DU this past weekend as the Pioneers played St. Cloud State University. Terry skated for Team USA which made it to the quarterfinals before losing to the Czech Republic.