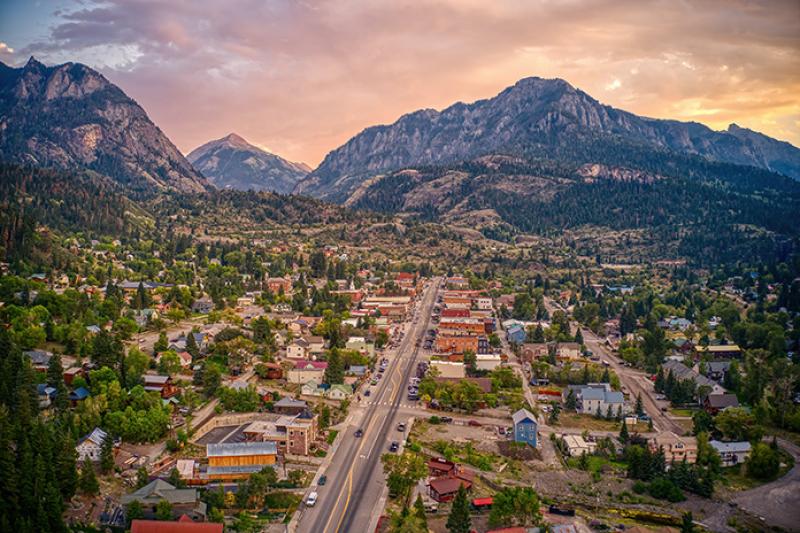 This article is the cover story in the spring issue of University of Denver Magazine. Visit the magazine website for bonus content and to read the article in its original format.

Her first two weeks at college, Taylor Szilagyi hardly slept. Some of that, unquestionably, could be traced to the typical first-year jitters: leaving home, settling in, finding friends, adjusting to a new lifestyle.

More than anything, though, it was the noise. The sounds of cars and late-night foot traffic outside Johnson-McFarlane Hall seemed thunderous, especially compared to her home ZIP code.

If you ask her, Szilagyi (BA ’14, MPP ’15) will tell you she grew up about 40 miles from Great Sand Dunes National Park, in the two-gas-station town of Center, Colorado—population 2,000. But in reality, home was a ranch 20 minutes outside of Center, an example of the agricultural community that thrived on its potato and barley crops.

When it came time to pursue college, Szilagyi practically ran to the big city, away from her one-building school district and 35-person graduating class.

But it wasn’t until a public policy class at the University of Denver, discussing the grievances of Colorado’s more rural counties, that she realized the differences between where she grew up and where she now lived were more than superficial.

“Everyone I was in that room with came from an urban or suburban area or a smaller town that had access to all of these bigger resources,” Szilagyi says. Her family, in fact, fought for equity in education funding in a celebrated case, Lobato v. State of Colorado, that made it all the way to Colorado’s Supreme Court. “We had this understanding gap. I knew at that point that I needed to go back to my roots and be involved in some sort of rural conversation.”

Currently the director of policy communications at the Colorado Farm Bureau, Szilagyi advocates for the industries and communities that shaped her.

“Even though I’m not at home on the ranch, I’m not working cattle every day, it’s been pretty special for me to come full circle and still represent the industry and the way I grew up,” says Szilagyi, who now lives in Centennial. “Agriculture is shrinking, farmers and ranchers are going out of business or retiring, and there’s not necessarily a lot of young folks to take over or make a living at it anymore.”

For years now, Colorado’s media commentariat has lamented the growth of an “urban-rural divide,” illustrated by more than a distinctly patchy political map. Cities along the I-25 and I-70 corridors are growing, thanks in part to high-speed internet, better health care and stronger economies. Meanwhile, despite providing the bulk of the state’s food and water, less-populated areas are shrinking.

In the face of this chasm, experts at the University of Denver and alumni across the state are building bridges to address inequities and forge solutions to persistent problems—among them, a demographic shift that has caused talented workers to leave the communities in which they grew up.

“There’s that whole ‘brain drain’ phenomenon where someone seeks out opportunities or a job in a more urban context or out of state,” says Rachel Forbes, an associate professor of the practice at DU’s Graduate School of Social Work. “They might have good intentions of coming back home, but life gets in the way.”

Since 2013, as director of the Western Colorado MSW program, Forbes has been training residents from Breckenridge to Montrose, equipping them to serve the unique needs of their communities and, hopefully, increasing their chances of staying put.

After successfully launching a master’s program in Colorado’s Four Corners region, GSSW expanded its reach. Two brick-and-mortar buildings in Glenwood Springs are a hub for aspiring social workers as well as those looking to sharpen the skills needed for a wide range of human services.

To create a relevant curriculum, Forbes and GSSW consult with the community. A local advisory board steers the program to meet the region’s distinct needs. In an integrated behavioral health class, students acquire and refine the skills to support local mental health professionals. An immigration policies and services class equips them to serve a large Spanish-speaking population.

“The curriculum is definitely designed to be responsive to needs here. It’s not something you would be able to access in Denver,” Forbes says. “I’m really proud that the community asked us to be here and we were able to meet that need. I don’t know if I would feel as comfortable leading this program if DU was the one to approach the community and say: ‘You need this. Let us be your solution.’”

While the state’s regional differences are distinct, Tracy Vozar has noticed that, these days, a global pandemic has leveled the playing field.

“We’ve all experienced a lack of access to resources and social support, the connections you can have from living in a more urban setting,” says Vozar, a clinical assistant professor at DU’s Graduate School of Professional Psychology. “We’ve all been more isolated from friends and family and the supports that we might be able to count on. Figuring out how to better connect seems really important, and technology has proven to be a method of facilitating that connection.”

With Parentline, a free telehealth service for pregnant and postpartum families, Vozar feels she’s been able to close the gap. When the pandemic hit in March 2020, her team of doctoral trainees found their 16-county caseload suddenly full.

An admitted “telehealth skeptic” at first, Vozar has been amazed at the way different types of therapy have adapted to an online environment. Plus, the pandemic has forced changes in the way psychologists receive training, removing the need for travel and in-person tutelage.

The convenience of the virtual world is an asset, agrees Elaine Belansky, an associate research professor at DU’s Morgridge College of Education and director of the Center for Rural School Health and Education (CRSHE). Certainly, it has helped CRSHE continue its quest for equity in rural, low-income school districts, even during these socially distanced times.

That said, Belansky adds, FaceTime will never be a replacement for face-to-face interactions, especially when it comes to reaching more remote communities.

“Virtual can work if you already have strong partnerships in place,” she says. “Part of the reason we’ve been successful is that we travel to rural communities at least monthly to build relationships and increase our understanding of challenges.”

The reason CRSHE has succeeded, she says, is because of the in-person work she and her colleagues have put in to understand the staffing, support and resource-accessibility issues that come with the territory in less populated, higher-poverty areas.

After connecting with various communities during COVID, CRSHE is focused on addressing the stress rural educators are feeling from shifting their educational approaches. That’s on top of shouldering the trauma their students may regularly face: Rates of suicide, depression and obesity trend higher among rural students. Throughout her work, however, Belansky pauses to make sure she’s being fair to the state’s often overlooked communities.

“It’s so easy and sexy to talk about all the negatives, but I think it’s very important to create a balanced picture of all the positives,” she says. “One of the beautiful things about rural Colorado is you’re raising a family in a community that’s going to know the names of all of your children. Whether they’ve met you personally or not, when you go through a difficult life event, they’re going to come and help you.”

Appreciating those strengths and acknowledging any differences are cornerstones of Alison Krögel’s work in the College of Arts, Humanities and Social Sciences.

“I think it’s useful for students to have the ability to work in many different contexts and with many different people,” says Krögel, an associate professor of Spanish who also specializes in the indigenous South American language of Quechua. Whenever possible, she pushes her students to explore places that feel uncomfortable. “I think it’s a skill, like any other, to understand other communities, values and resources and the ways they interact with their community, and to do so in a respectful way.”

Krögel’s own research has taken her to northern Colorado’s mountain plains and forests. For more than 100 years, sheepherders have escorted their flocks through highland pastures, carving artistic “arborglyphs” into the bark of Aspen trees as they pass; since the early 1980s, the majority of these herders have been Peruvian Quechua workers.

A team of geography students is helping Krögel map the glyphs, hoping to see how factors like climate change have affected the routes of the sheepherders. Ultimately, she wants to showcase her work in the places that inspired them.

“Something that’s important to me with my research project is to not just disseminate knowledge in the metropolis,” she says, “but to share research findings back with the community that I’m working with in a rural space.”

Tim Coleman, meanwhile, is bringing his findings to lawmakers at the state capitol. Coleman (MPP ’17) is hardly a kid from the country—he describes his Vienna, Virginia, home as “the last stop on the orange line” Metro from Washington, D.C.—but his work at the Colorado Rural Electric Association (CREA) has taught him the importance of nuance.

“Rural is an extremely broad and encompassing word,” he says, which could mean anything from frontier farmland to mountain ski towns. His work with the CREA has acquainted him with 70% of the state’s land mass, which houses about 20% of Colorado’s population. “While they have similar issues and priorities and struggles, the makeup of those communities, as well as the economic drivers, can be vastly different.”

As a government relations specialist at CREA, Coleman is tasked with identifying issues facing rural communities—be it a lack of broadband, a scarcity of health resources, or vegetation management and wildfire prevention—and proposing policies to bring about positive change.

Calling the relationship an “urban-rural divide,” he says, is inherently schismatic. In his mind, it’s less of a canyon to be bridged and more of a scale to be balanced.

“I have heard a number of times that people in more rural areas are struggling because they feel like their way of life is being taken from them,” he says. “I think that’s a really hard conversation that we have to have as academics, as policymakers and as citizens of Colorado. How do we maintain that lifestyle for those folks that play an integral role in our economy? Colorado’s economy cannot flourish if we have other parts of our state that are being left behind.”

A revolutionary change isn’t going to happen overnight, according to Kerry Plemmons, a professor of the practice at the Daniels College of Business, but “every day we wake up as faculty we need to say, how might we help the underserved?”

For Plemmons, the answer has been through the Public Safety Leadership Development program, which, since 2008, has recognized the differences among the state’s first responders and spotlighted the leadership skills they all need to “protect and serve.”

Despite all the training they receive in their academies, Plemmons says, public safety officers across the state are rarely proficient in emotional intelligence. His curriculum focuses on negotiation, self-awareness, team dynamics and conflict de-escalation. In the years ahead, he hopes to expand the training to rural Colorado governments and nonprofits.

As with any university, Plemmons says, DU has an obligation to inspire leadership, provide support and improve its ecosystem, near and far.

“We absolutely have a responsibility,” he says. “I’m adamant that our mission has no geographical boundary and sure as hell should be as dedicated to helping people in rural populations be as safe and sustainable as anywhere else. Being a private institution dedicated to the public good doesn’t end at the Denver city limit.”