Before the University of Denver’s Class of 2019 steps off campus and continues its journey, DU welcomed back its past graduates for the annual Alumni Weekend Celebration. Over four days, DU honored distinguished alumni Marion Edwards (BA ’72), Floyd Little (MSJA ’75) and Abdulfattah Sharaf (BA ’94). But the University also planned a diverse schedule of events to celebrate its 140,000 alumni, who live in all 50 U.S. states and 145 countries. Scroll down for a recap of the weekend!

The distinctive chiming of silverware on wine glasses brought the Joy Burns Tuscan Ballroom to a hush as the eighth annual DU Vin Festival began with remarks from Charles Phan, chef and owner of the Slanted Door in San Francisco. Phan and students from the Fritz Knoebel School of Hospitality Management wined and dined guests through a four-course meal, each paired with a hand-picked bottle from different parts of the world.

The menu paid homage to Phan’s Vietnamese heritage. He arrived in the United States as a refugee in 1975 — fitting, because many of the Fritz Knoebel hospitality staff are refugees and immigrants who are part of the Ready for American Hospitality (RAH) program.

“I think it’s so important we help folks who need help,” Phan said in his opening remarks. “I’m grateful to get to do this and give back.” 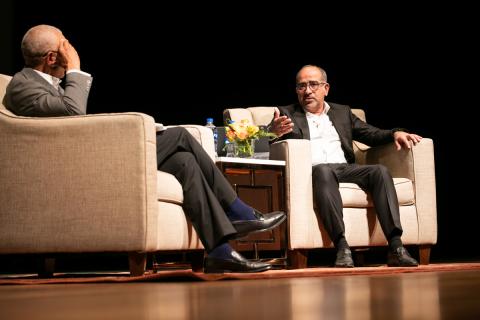 Distinguished alum Abdulfattah Sharaf took the stage at the Newman Center for the Performing Arts to share his wealth of knowledge about financial growth in the Middle East and North African markets, gleaned from his position as CEO of HSBC Bank in the United Arab Emirates and head of international markets in the Middle East, where he oversees the bank’s operations in Bahrain, Kuwait and Algeria. His address was part of the Voices of Experience series, sponsored by the Daniels College of Business.

Sharaf took the audience to the year 2050, delving into future projections of a moratorium on oil sales in the UAE, financial terrorism, cryptocurrency and emerging mass transit technologies in his country.

“Meeting different people from different cultures all over the world at the University of Denver and learning about them set me up for success,” he told the audience in an intro video. “What makes me an effective leader is being myself. … When I need to be inspired, I look around me in Dubai and everything is inspiring. Looking at the buildings and people, diversity, 200 nationalities. It is really inspiring. My advice to the graduates of 2019: Follow your passion and do what you love.” 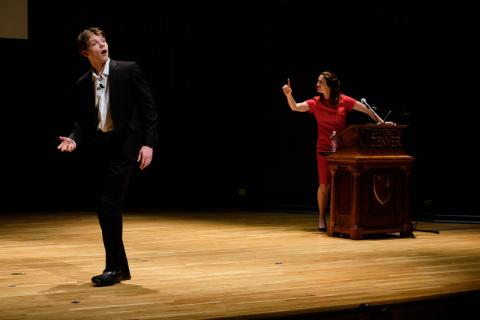 Anne Penner, an associate professor in DU’s Department of Theatre, exuded energy as this year’s Livingston lecturer. Her lecture discussed truthfulness in performance, unpacking the history of realism and what goes into an actor’s process of bringing a sense of reality to their performance.

“Actors responsibilities are twofold, first they must be able to use their imaginations to place themselves in specific fictional given circumstances and believe them enough to convince an audience to suspend their disbelief,” Penner said. “And second, they should possess the technique, vocabulary — rooted in the visceral world of their body, their voice and their relationship to language — to share that world theatrically with an audience.”

Penner opened up the inner workings of the actor’s toolbox to the audience with the help of three students, highlighting their talents as they demonstrated how the techniques she described can make a performance feel truthful. 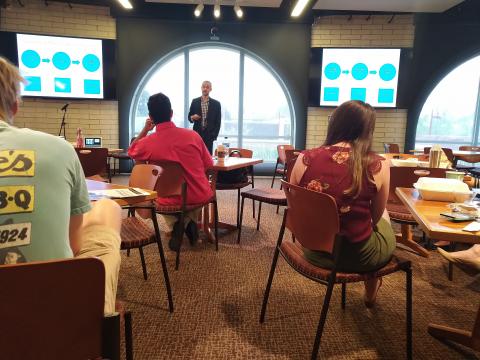 Alumni got a sneak peek at the future during a pair of sessions coordinated by DU’s Project X-ITE, a hub of cross-disciplinary innovation, technology and entrepreneurship. Students from one of many X-ITE-supported startups presented their ideas and networked with past graduates. Over lunch, Chief Innovation Officer Marty Katz recapped DU’s recent AI Summit, before introducing professors Michael Myers and Anthony Fulginiti who outlined the AI research they are conducting and talked about the technology’s role in the future.

On paper, the 2019 distinguished alumni couldn’t have been more different: a television executive, a professional football hall of famer and the CEO of a bank. But as Chancellor Rebecca Chopp noted ahead of the University’s Gold Dinner, the diversity sends a message.

“This year’s class of distinguished alumni represent the breadth of accomplishments of our incredible alumni community,” Chopp told the crowd at the Newman Center. “They demonstrate both local and global impact; they have influenced and shaped efforts in sport, entertainment and global finance.”

The University honored each distinguished alum with a video tribute, an individually crafted musical performance and a statuette recognizing their accomplishments.

Marion Edwards, the longtime president of international television at Twentieth Century Fox received a toast to her career from the Lamont Jazz All-Stars. The four-piece student band paid tribute to her influence on American pop culture with a medley of TV themes that included the Simpsons, X-Files and Family Guy, among others.

“Any person who graduates from a university puts in a lot of time and effort,” she said as she accepted her award, “but you never dream that you’ll be asked to come back later in your life. And I truly appreciate the recognition.”

The Denver Broncos Stampede Drum Line provided an appropriately boisterous introduction for Floyd Little, who earned a master’s degree in judicial administration while putting up hall of fame numbers for the local football franchise. The Broncos Brass belted out the pop hit “Happy,” as Little beamed from the seats.

“I’m so glad they didn’t forget about me and asked me to come back,” Little said of DU. “I’ve had the time of my life the last two days. I’m proud to be back because this is the foundation of all I’ve accomplished. So I’m here to thank you and the University, for giving me the opportunity to represent you and hopefully I’ve done great things and I hope that you’re proud of me.”

Before Abdulfattah Sharaf was the United Arab Emirates CEO of HSBC Bank Middle East Limited, he was a political science major who loved to play the guitar. Fittingly, the Lamont Guitar Trio serenaded him and his family at Gates Concert Hall before he accepted his award.

“I’d like to share with you what I learned from the University of Denver,” Sharaf said. “I learned a lot about diversity, openness, ethics, transparency. Thank you very much, I’m very honored.” 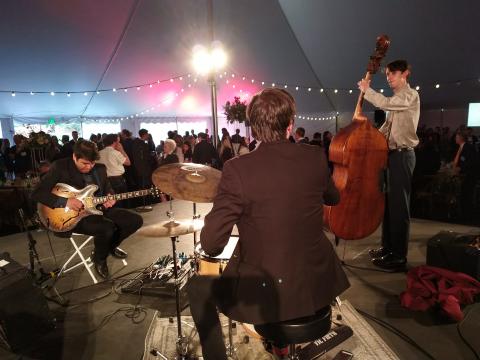 Gathered beneath an enormous tent in front of the Mary Reed Building, more than 500 people raised their glasses, toasting DU’s distinguished alumni and the students who will become alumni in just a few weeks. The Gold Dinner celebrated the DU Community past and present. Brandon Buzbee, associate vice chancellor of global networks, asked those in attendance to listen carefully as the bell on the old Buchtel Chapel rang for 19 seconds, commemorating the Class of 2019. The chapel burned down decades after it was built in 1912, Buzbee explained, but its cornerstone and original tower remains rooted to campus.

Armin Afsahi, vice chancellor for Advancement, surprised Chancellor Rebecca Chopp with a special award, honoring her service to the University before she steps down from her position this summer. Trustee Margot Gilbert Frank and alumna Parker Calbert (BA ’13, MBA ’13) joined Chopp on stage to present the honor.

“You created this sense of belonging in the DU community,” Calbert said. “That means your legacy will carry on for many, many years.” 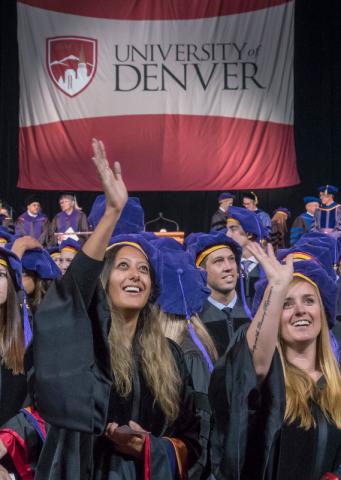 "Take responsibility personally for what takes place in your own life," Little said in his speech. "And from this day forward, you are the captain of your own ship. As you navigate your journey beyond this memorable moment, know that there are only three kinds of people in the world: those who make things happen, those who watch things happen and those that don't know what happened. Choose to challenge yourselves everyday because none of us will ever know what we can become if we don't."

Joaquin Gallegos delivered the student address. Initially, Gallegos told the DU Newsroom, he thought he would become a doctor or a dentist. But after working with retired U.S. Sen. Byron Dorgan (MBA ’66), he realized that working as an individual health care provider would limit his ability to promote widespread change. 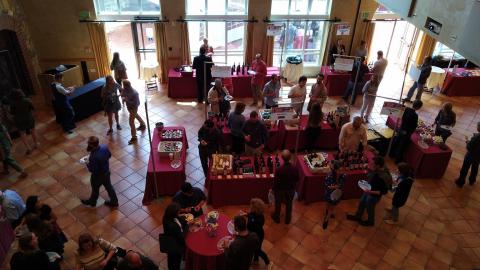 As early morning snowflakes yielded to blue skies and sunshine, the DU community streamed into the Joy Burns Tuscan Ballroom for the DU Vin Grand Tasting, featuring food from local businesses and wine from more than a dozen vineyards and wineries. Attendees were invited to sit in on complimentary sessions on beer, spirits and Champagne or enjoy live music as they snacked. 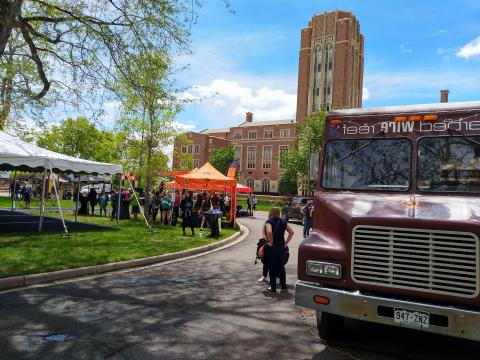 Under the sunny Saturday skies, DU’s campus transformed into a full-on food festival. Food trucks from across Denver set up shop as part of the Truck Stop Rally, featuring a Pioneer Pit Stop with special deals for DU alumni.

“I am proud to be a DU alum; I’m happy I went to DU,” said AJ Cheang (BSBA ’17), who returned to enjoy the food. “The culture and support around DU is fantastic.”

Own Orr, who will graduate from the Daniels College of Business in June, accompanied Cheang and said he appreciated the University’s commitment to its alumni.

“It’s good to see resources available to us,” he said. “The expansion of those opportunities is a real reason to come back. It helps us come back to campus and stay engaged. I really appreciate the momentum from Advancement to plant those long-term seeds.”

Alumni Weekend came to a close with the ninth annual New Beginnings Pow Wow, which welcomes the larger community to campus for a celebration of Native American culture. The event featured jewelry, crafts, food and traditional music and dancing. 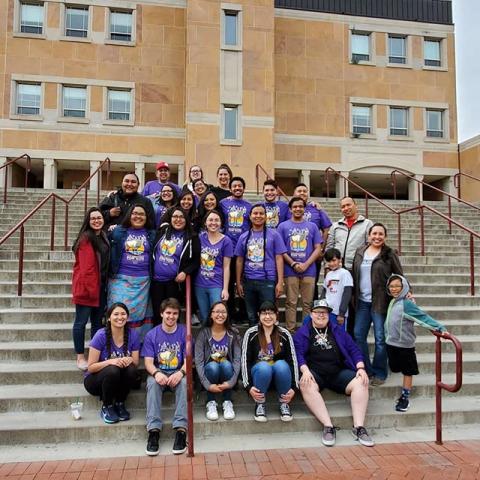 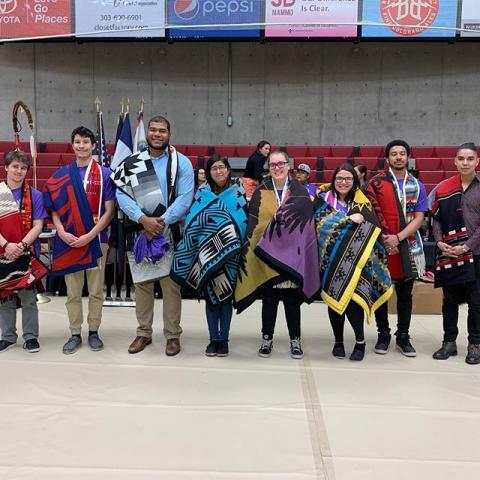