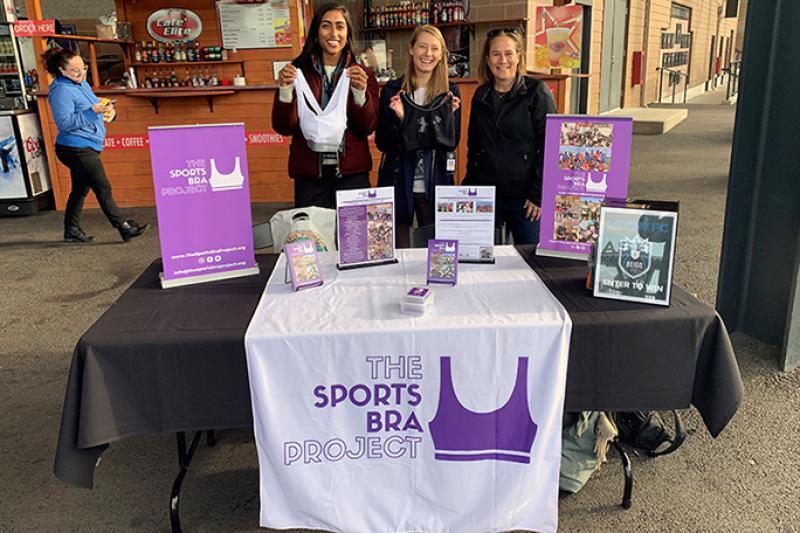 Sarah Dwyer-Shick, right, hosts a sports bra drive at a National Women's Soccer League game outside of Seattle in September 2019.

Quick, make a list of everything you need to start playing soccer.

A ball, for starters. A goal to kick it into. Maybe a pair of cleats. And if you’re playing on a team, jerseys could be helpful.

“If you provide girls with soccer balls or any other sports equipment and they don’t have a sports bra and they’ve reached an age where they may need one, it just is a barrier,” Dwyer-Shick says. “It’s something that’s needed across sports. If you’re a recreational-level athlete that’s just coming into sports or you’re an elite athlete, you wear a sports bra.”

Yet on a 2015 trip to Namibia, Dwyer-Shick saw, hardly anyone had one. As she handed out the more standard soccer supplies with her friend’s nonprofit, a mention of the bras she had brought sparked a realization from a local liaison: “Our national team needs these.”

From that point forward, Dwyer-Shick and her husband, Andy Clayton (BA ’94, MS ’96), have dedicated themselves to the cause. Their nonprofit, The Sports Bra Project, collects new bras from across the United States and distributes them to athletes in need, internationally and domestically. (“Even though we’re one of the wealthiest countries on Earth,” Clayton says, “it’s still an issue.”)

“I never thought twice about it,” Clayton says. The bigger problem was that the vast majority of male coaches hadn’t thought about it either.

The more Dwyer-Shick and others in her circle of women in the soccer community talked, the more Clayton learned about the gender inequities that tilt the playing field: Girls who quit out of physical discomfort; parents who won’t let their daughters play once they develop; soccer clubs that funnel donations to boys programs and women who are ignored when they mention the disparities.

“[Sarah has] had a career in soccer that has had its ups and downs, and a lot of those downs come from being the only woman in the room,” Clayton says. “I think this gave her an outlet where she could build with her passion, making sure the girls and women got what they needed.”

Dwyer-Shick initially transferred to DU as a junior to play soccer and ended up on the school’s inaugural women’s lacrosse team. Clayton, a graduate assistant in DU’s sports information office, was covering the soccer team and shared an early morning shift with Dwyer-Shick. From then on, Clayton says, the couple were practically inseparable. Ten years later, they were married—Dwyer-Shick, a former college soccer coach now focused on youth development with a degree in sports management, and Clayton, a sports editor at the New York Daily News.

Now they’re nonprofit partners too. To date, The Sports Bra Project has accepted more than 7,000 bras, boxed them and shipped them to partners around the world for hand distribution. Each bra has a tag with a personal message of encouragement, typically handwritten by the donor.

“The women receiving the bras know that they’re coming from someone who wants them to play and is like them,” Dwyer-Shick says, “and the ones that are donating the bras get to share the joy of sports that they like.”

Most donations come from sports bra drives held by youth clubs and sports organizations around the country—an intentional part of Dwyer-Shick’s business plan. It’s not just about distributing bras, she says. It’s about improving the culture around women’s sports.

“The sports bra for us is the immediate need; it’s the simple thing to talk about,” she says. “But the bigger conversation is why we’re doing this. It’s providing opportunities for girls to take on leadership roles and have an impact in their community. It normalizes their needs and their experiences and their ability to see themselves as not just a player, but as somebody who has an impact on the sport, whether as a coach or an administrator in any capacity.”

Emerging from the challenges of a global pandemic, Clayton and Dwyer-Shick have their eyes on growing The Sports Bra Project. It gained nonprofit status in February 2020, and social media campaigns have spread their message and expanded their network of partners.

The opportunity to do the work as life partners has made it even more meaningful.

“It has been wonderful to be able to build The Sports Bra Project together,” Dwyer-Shick says. “From the day he called the land line in my dorm room to ‘ask the score of the game,’ Andy has always been supportive of me and women in the game. I am forever grateful for DU bringing us together.”