This isn’t some lifelong dream. And he sure isn’t doing it for the money.

In fact, even with a University of Denver business degree, Jeff Nickless (BSBA ’09) never saw himself owning a restaurant.

But ask him about his plans to reopen and restore the legendary Campus Lounge, and he’ll take you back to his grade school days at St. Vincent De Paul Elementary. Back then, he remembers, he would run through the Bonnie Brae neighborhood to his grandfather’s University Boulevard meat market before sliding into the establishment next door for an ice-cold Coke.

A decade and a half later, Nickless could be found inside that same sports bar, on the corner of University and Exposition Avenue, this time with his DU buddies, a burrito smothered in green chili and a pitcher of beer. 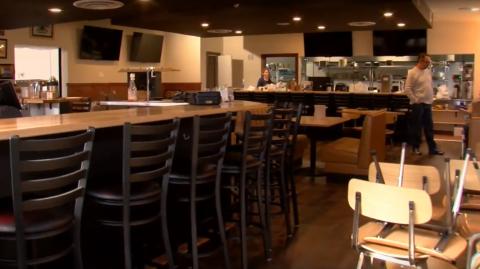 “This has been my and my family’s stomping ground for many years,” says the Nickless of today. “It’s evolved over the years into an icon of Denver. That’s what it was for 40 years, and that’s what we want it to continue to be.”

But that’s not what it has been lately. Even its former owner, successful Denver restaurateur Dan Landes of Watercourse and City, O’ City fame, acknowledges that. “Basically a failure,” is how he described it to the Denver Post when he 86ed the place in March, admitting the new vibe and vegan-friendly menu paid little homage to its prior owner Jim Wiste.

Wiste (BSBA ’68), a former DU hockey player and member of the University’s Athletics Hall of Fame, bought the Campus Lounge in 1976, he told the Post before his January death. And over the course of 40 years, he made its horseshoe bar the neighborhood spot to watch the big game, especially when his Pioneers took the ice in Magness Arena.

“There are people in the area that want what we’re going to bring back from Campus Lounge,” Nickless says. “They want a place where they can go socialize with their neighbors and their friends in their own neighborhood and watch sports.”

Nickless certainly feels he has his work cut out for him, balancing tradition with establishing a new identity. The space, in his words, is clean and fresh. The kitchen is new, as are the floors. Distinctly crimson and gold booths sprawl beneath signed jerseys of local sports heroes. And there are more than a dozen TVs — including three in the bathrooms — to watch while enjoying a simple menu of burgers and the legendary green chili smothered burrito.

What’s more, Jim Wiste will still very much be a piece of the pub. A gold medallion in his honor is impossible to miss outside the front door. And the north-facing wall will soon feature a mural depicting the forward’s years on the ice.

At the same time, Nickless wants to make his old college dive more family friendly. It is perhaps fitting for a man whose entire family is backing his efforts to make sure “the tradition lives on.” Aunts, uncles and cousins have all pitched in to get things set for the Oct. 21 opening, while Nickless’ father, Dan, is a business partner.

“I’ve always wanted to partner with my dad on something,” Nickless said, “and give back and thank him for everything he’s done for me. He paid for my DU education.”

Initially, Nickless used his finance and real estate degrees to work in banking. He still has a day job acquiring land for Toll Brothers. He is the first to acknowledge that he’s “not a restaurant guy.” But he credits the Daniels College with preparing him for this unexpected venture.

“A lot of the knowledge and brainpower that I have when analyzing the business [venture] and determining if it’s something that can be profitable and make money was attributed to my education at DU,” he said. “They gave me an education where I could get out into the real world and really put my best foot forward from day one.”

He sees opportunity in the Campus Lounge, which 50,000 drivers pass every day. But regardless of whether it pans out, he will remain proud of his status as a Denverite, a Pioneer and the place down the road he says represents it.

“I want people to know I’m passionate about DU, and I appreciate everything it’s done for me,” he says. “They have an alum right down the road with a restaurant. We have a long-term lease, and we hope to be here for a long time.”