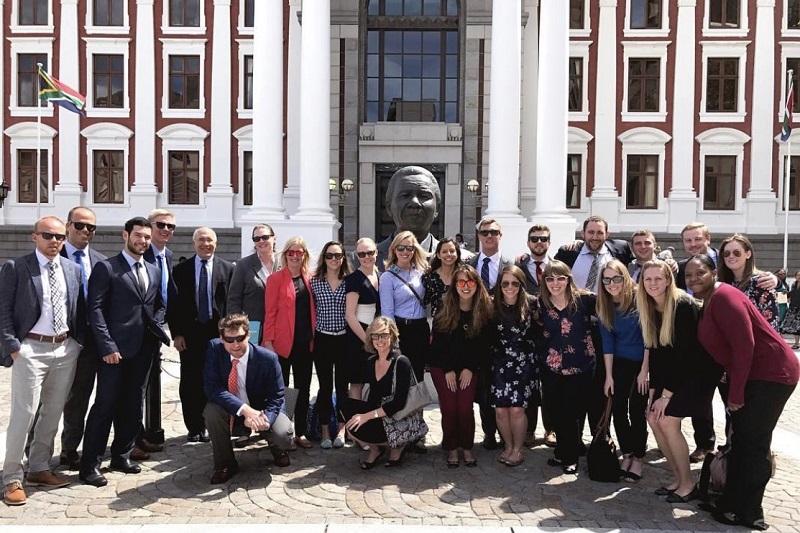 “We want them to be out of their comfort zone,” says Cahal, director of MBA global programs at the University of Denver’s Daniels College of Business. “There’s a reason why these international trips are one of the highlights, if not the highlight, of the program. It’s more than just, ‘Botswana was really cool.’ It is typically emotional and may show up in different ways professionally and personally.”

Every student pursuing a residential MBA degree from DU must experience at least a week in an unfamiliar country, taking on language barriers, unfamiliar food and a previously unknown culture. All three of Daniels’ MBA programs — the full-time “Denver” option (DMBA) and the part-time “executive” (EMBA) and “professional” (PMBA) tracks — feature a study abroad component.

It’s experiential learning at its finest: EMBA and PMBA students vote on the destinations for their international trip and create feasibility studies to assess the opportunity to market a product or idea in a different country. The full-time DMBA students work on consulting projects with local organizations that they know little to nothing about. They set up meetings, conduct research and explore the country.

“There’s business everywhere,” says Cahal, from an office with no fewer than three globes, two world maps and two dozen postcards. “The learning happens at extremes.”

Moving to Denver seemed extreme enough for Loren Sjoquist (PMBA ’17). Minnesota born and bred, Sjoquist comes from a family whose members all lived within 20 minutes of one another. Until it was time for his cohort to travel to Cape Town, South Africa, Sjoquist had never needed a passport.

The experience of walking streets that divided mansions on the one side and shanties on the other has stuck with him. Perhaps most powerful though was meeting with local businesses and the banks that invest in them. He remembers conversations about the role of a business and the soul of a corporation.

“I think it resonated,” he says. “Thinking about what you want to be in the future, what you want to accomplish in your career and how you want to leave your mark. What brings me the most joy is being able to create opportunities and a good working experience for other people and getting to a point in my career where I can be altruistic and pay things forward.”

Immediately after his graduation, Sjoquist’s company, Emerson Automation Solutions, asked him to work as a strategic planner with the president of global sales, based in his home state. When the company offered him a promotion to a job in Singapore, Sjoquist jumped at the opportunity to go someplace he had never been before.

He leaned on his experience in the PMBA program as he traveled to southeast Asia to create a growth strategy plan.

“It gave me comfort and confidence that I could push myself into a foreign situation, not just literally but also metaphorically, and adapt and overcome,” he says. That was true whether he was learning a new cuisine, discovering what it feels like to be a minority or figuring out how to understand other human beings. “For the longest time, I approached every problem as one-dimensional, based on the reality I was exposed to. Now I feel like I can tap into so many different angles and perspectives. The most effective form of communication is to be able to see it from both sides.”

From Jim Altman’s perspective, he only needed to see the part of the world that was in front of him. The Midwesterner had settled comfortably into an accounting job in Denver with his wife and two teenaged kids. A churchgoing man, he never had an interest even in missionary work abroad.

“You pretty much live your life with blinders on,” Altman (EMBA ’12) says, remembering his time before enrolling at Daniels. “I think it’s one thing to experience another person’s culture when you know them here in the United States. It’s another thing when you go to a foreign country and set foot on their soil and see them in their element. All of a sudden, you have a greater appreciation for the culture that’s over there.”

An MBA, he had hoped, would put him on track to move up in his company. The study abroad component (in Hong Kong and Vietnam), he figured, would just be a couple weeks of discomfort (he had only traveled to Canada and had sworn off Chinese food).

He never would have thought the experience would push him to upsize his house to accommodate a few adopted children.

When he returned to Denver, lying in bed with his wife, he thought back to the orphanage his cohort visited in Vietnam.

“One of the things I love about DU’s program is the emphasis on social capital,” he says. “It’s not something you do for class; it’s a lifestyle. These kids were just looking for someone to love them.”

His time abroad, Altman explains, helped the couple realize they had been given a divine vision to adopt children in need. With the help of a local agency, Altman and his wife adopted two children from China, and they have plans to add one more. All of them, the children and parents alike, have been transformed by the experience.

Professionally, Altman has grown too, serving as chief financial officer at a number of companies since he graduated.

“I was an accountant when I went into the program,” he says. “When I was done, I [also] graduated from accounting and I started to see the operation of business from a big-picture level. The leadership aspect of that program is phenomenal. I’m able to use a lot of the stuff I learned on a daily basis.”

Ali Filbert (DMBA ’18) still routinely brings up her trip to Uganda as she works as a small business consultant.

She, too, had not left the continent and was nervous to emigrate from her comfort zone. But arriving in Africa changed all of that.

“I think that’s what stuck with me the most,” she says, “being able to go explore a city. It wasn’t at all what I thought I would see. It was better. I could dig down into the heart of the country we were in and find out what it was all about.”

Her team partnered with the Global Livingston Institute, helping a local boating business with its finances and operations. The project was located in a remote part of the country, only accessible via waterway, and Filbert had to work with interpreters to communicate. The greatest lesson she learned was appreciation of a client’s culture.

“When you’re at a company that does business with a lot of outside vendors, whether they’re in the United States or whether it’s international, you have to understand who you’re working with beforehand,” she says. “You always have to be aware of culture and customs. It’s important in business.”

There are too many transformative stories like these for Amanda Cahal to count. But she sees a common thread in every student experience.

“Impact is, I think, what drives us all. It shows up in a lot of different ways: the projects that have turned into jobs or a career advancement or an entrepreneurial idea,” she says.

The program isn’t designed to make every student into an ex-pat, she adds. But to be successful in today’s business world, students should consider global exposure and understanding as critical.

“It’s more the tangential learning of, how can you be more adaptable?” Cahal explains. “How can you connect with people who are very different than you are? How do you see the gray areas?

“Even if you stay in Denver for the rest of your life, you will be operating in a global market one way or another,” she adds. “Globalization is increasing and people need to learn the skills to succeed in that world. We’re doing them a disservice if they graduate without it."