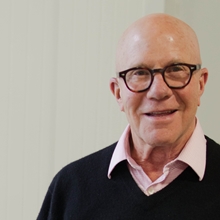 I first met Arlan Preblud in the cavernous kitchen on the lower level of Mile High Stadium during the second half of a Broncos game. Preblud was explaining to our group of volunteers the process of "sweeping the suites" after the game. He wasn't distributing brooms, but rather multi-tiered speed racks stacked with bins to collect leftover food that would otherwise go to waste.

Preblud (BA '63, political science; JD '66) is the founder of Denver-based non-profit We Don't Waste. Since 2009, We Don't Waste has recovered and distributed over 86.5 million servings of food, resulting in over 28.8 million meals. More than 180,000 less-fortunate people in the Denver metro area benefit from the program each year.

Preblud long has had a soft place in his heart for those in need. As a 35-year practicing attorney in criminal defense, real estate and domestic relations, he often served folks who were underrepresented and underserved in the community. As a volunteer at various non-profits, he recognized a gap in what the agencies were serving their clients because of limited financial resources, and vowed to make a change.

"Having numerous connections in the food industry I began to ask, 'What do you do with the extra food at the end of the night?'" said Preblud. "The answer was, 'We throw it away.' My rebuttal was, 'Would you donate the food?', and the answer was yes!"

In the beginning, much of the collected food was delivered the same day, as there was no storage capacity. Today, We Don't Waste has grown to include three refrigerated trucks, and an 11,700–square-foot distribution center with a 1,000-square-foot cooler. Because of the added capacity, food collection and distribution can occur on a larger scale.

Just like our group at Mile High Stadium, We Don't Waste relies on volunteers to assist in collecting and sorting recovered food throughout the year.

When the Broncos game ended and fans vacated the suites, our group jumped into action. We split into teams, with two teams on each floor, each team pushing a rack with bins. We started on one end of the hallway and worked our way to the other.

The amount of leftover food we found was astounding. Burgers, brats, sliders, prime rib, sides and desserts, some of it never unwrapped. We separated everything into bins, and moved quickly to the next suite, staying just ahead of the cleaning crew.

Once we reached the end of the hallway, we took our overflowing racks back down to the kitchen, where we rolled them into a walk-in cooler. We were all elated for the good work we did and knowing that hundreds of people would be eating a delicious, nutritious meal the next day.

"Hunger is becoming an increasing and pervasive issue in America, with nearly 50 million Americans relying on the Supplemental Nutrition Assistance Program (SNAP)–formerly food stamps–to feed themselves and their families," said Preblud. "Yet, with a benefit of only $1.42 per meal per person, SNAP households are struggling to feed their families, let alone with healthy food. Meanwhile, approximately 40 percent of food produced in the United States goes to waste, resulting in overflowing landfills and a tremendous waste of resources used to produce the food."

According to Preblud, the Natural Resources Defense Council recently identified Denver's meal gap at over 15 million meals per year, and estimated that rescuing 7.1 million meals would require an annual operating investment of $6.2 million.

"We Don't Waste rescued and distributed over 10 million meals in 2017 with an annual operating budget of only $616,405, or only 6.15 cents per meal," Preblud said. "Our program model is a proven, effective and efficient way to meet the needs of Denver's hungry, as we feed more people than any single agency can."

Although the Denver non-profit has been contacted to establish similar operations in other cities, there are currently no plans to expand operations.

"Considering the inequity of food insecurity, the mission of We Don't Waste – We support the community and the environment by reclaiming and redistributing quality food to those in need – is why the work of We Don't Waste is so important," he added.