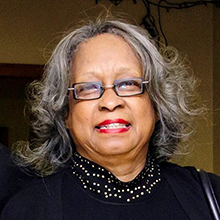 The University of Denver was not on Mollie Finch Belt’s radar when she graduated from high school in 1961. Neither was a career in journalism. But, Belt (BA ’65, sociology) has learned to navigate all of life’s twists and turns with poise and passion to find her true purpose in life. That includes owning and operating The Dallas Examiner.

After graduating from high school in Dallas, Belt received a scholarship to Spelman College and, with her mother Mildred’s encouragement, enrolled as a freshman that year.

“I had always wanted to attend Spelman,” said Belt. “It was part of the Atlanta University Center [a consortium of historically black colleges and universities], and I thought it would be a good intellectual and social experience.”

Unfortunately, her excitement did not last long. Belt found herself disappointed by the college’s limited resources and strict socialization rules. On top of that, she was thrust into the heart of a student-led movement for civil rights in Atlanta.

At the time, the Atlanta University Center was the staging ground for student protests, marches, sit-ins and boycotts. Riding alone on the train to and from Atlanta was dangerous, so Belt always traveled with a group of other students. She remembers participating in demonstrations on campus; though she was not arrested, others were. It was an uncertain, tumultuous environment.

Her father, Harvard-educated attorney Fred Finch Jr., believed she would receive a more well-rounded education at an integrated college in the North and suggested she transfer to the University of Denver. Having spent the majority of her life in the segregated South, the move to Denver offered Belt a very different experience.

“At DU, I was free and unafraid. I experienced a new life,” said Belt. “And, I learned to be an independent thinker.”

Small classes allowed for open discussion and professors encouraged students to think critically and speak freely. Inside and outside the classroom, Belt interacted with students from varied backgrounds, from all over the country, sharing experiences and learning about each other.

She remembers spending time with her roommates discussing life’s questions and the world around them. Though they’ve gone their separate ways, she has remained close to a few of her DU roommates and friends; they still talk to each other almost weekly.

DU provided Belt a more flexible environment where she was able to explore and discover her own path. Inspired by her aunt, she chose to major in sociology and minor in psychology.

“My mother’s youngest sister was a social worker and I idolized her. I wanted to work in a field where I could help people.”

Upon graduation, Belt translated her passion for social justice and desire to help others into a career in public service. Through her work at the Texas Employment Commission and later at the Harris County Manpower Program, Belt helped in the fight against poverty through employment counseling and job training programs.

After her husband completed law school, they settled in Dallas where she worked on civil rights issues for over 20 years, first as an investigator and then as Branch Chief in the Civil Rights Division for the Department of Health and Human Services.

As Belt worked to uphold civil rights, her father had a vision of his own. In 1986, Fred Finch Jr. founded The Dallas Examiner. He wanted to publish a quality weekly newspaper produced for African Americans in the Dallas community. But, tragedy struck when, just one month after publishing The Dallas Examiner’s first issue, Fred and Mildred Finch were murdered in their home.

Belt, their only child, inherited the newspaper and pledged to keep her father’s dream alive. In an effort to sustain it, she and her husband, James Belt Jr., invested their time and resources into the paper. For several years, Belt continued her work with the federal government while managing the newspaper, though she eventually retired in 1999 to dedicate all of her time to the paper.

True to her promise, Belt has not only maintained a quality newspaper, but elevated it to an award-winning publication. Over the years, The Dallas Examiner has won numerous awards from national, state and local organizations, including the National Newspaper Publishers Association, the National Association of Black Journalists, the Texas Publisher’s Association, and the Press Club of Dallas.

“Publishing The Dallas Examiner has been a joy. I am fortunate to have a very talented and dedicated staff who make it possible to do what we do,” says Belt. “We cover educational, social, political and health-related issues to keep our community informed and hold elected officials accountable. Though there is still a lot of work to be done, through the paper, I can do so much. It gives me the opportunity to help people in my community and I love it.”