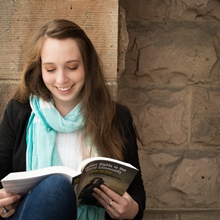 Mock trials, mustard and a search for meaning and purpose are what shaped Erin Orsley's decision to become a public defender.

Orsley (BA '16) graduated from the University of Denver in just three years with degrees in Religious Studies, International Studies and Spanish. In addition to her three majors, Orsley managed to squeeze in multiple extracurriculars—joining DU's Mock Trial Team, participating in the Social Justice Living and Learning Community, serving as a resident assistant, and studying abroad.

All of this was an impressive feat for someone who wasn't quite sure what she wanted to do when she arrived on campus. Orsley came to DU knowing she wanted to explore International Studies and Spanish, but she did not plan on adding a major in Religious Studies or going on to pursue a law degree.

During her first year, Orsley's roommate joined the DU Mock Trial Team and asked her to sit in as a witness. Erin loved it and was instantly hooked, joining Mock Trial soon after. She had been thinking of ways to pursue a career focused on social justice and came to the belief that through law she could effectively help others.

"While there are parts that are much loftier such as writing the laws and what it means to have laws govern our society, the practice of law is down to earth," Orsley said. "It is helping real people with real problems."

As a part of Mock Trial, Orsley spent countless late nights going over themes, theories, direct, cross, and travel arrangements with her teammates. She and her teammates, who quickly became friends, found commonality in a passion for helping people through law, while her coaches offered mentorship and connections within the Colorado legal community.

Mock Trial wasn't the only place where Orsley found an unexpected passion. In her first quarter, she took a required class with Professor Carl Raschke that piqued her curiosity in religious studies. She soon found herself looking forward to her "fun" class—not needed for her majors or a University requirement—which was an intensive writing course called Islamic Fundamentalism. That's when she realized she wanted to add religious studies as a major.

"While I had three different advisers, one for each major, the religious studies program was my home at DU," she said. "I could go there for anything and talk about classes, my social life or future plans."

And as Orsley puts it, she was "blown away" by the religious studies department. Her adviser, Associate Professor Andrea Stanton, was always available and willing to help—even outside her office hours—making sure Orsley had all the information she needed. When Orsley applied to law school, Stanton wrote her letters of recommendation, helped her find a job and connected her with a professor at her top choice, the University of Colorado Law School.

"When Erin asked me to write letters of recommendation for her law school applications, I was honored and thrilled," said Stanton. "Religious studies provides such an important foundation of transferable skills—everything from how to make sense of and analyze a dense text, to how to interact with people from different backgrounds—which are serving Erin well in law school."

Her professors challenged her to think differently about long-held beliefs and understanding of the world. In a summer course, Orsley and her fellow classmates were asked to re-examine how religion impacts the way society views sexuality.

"Most students coming to college from high school aren't aware of religious studies as a major, and don't yet know how relevant the study of religion can be. But, understanding how religion impacts politics, society, and economics in the U.S. and around the world is important," added Stanton.

This one lesson stuck with Orsley. It helped her think critically about how she categorizes and treats others. It helped change the way she thinks about the restrictions society places on marginalized communities, and how she can help create change in her own community.

"While I truly enjoyed my studies of International Human Rights law, I realized that there were human rights issues in our own justice system," she said. "I could impact people's lives right here in Colorado."

Orsley decided that she wants to be a public defender, and has already gained some hands-on experience in the Office of the Colorado State Public Defender in Grand Junction while completing her degree at the University of Colorado Law School—where she's on track to graduate early.

She has maxed out her hours at the CU Boulder Criminal Defense Clinic, which allows law students to advocate on behalf of indigent clients charged with misdemeanor and criminal offenses.

Through her experience in the courtroom, Orsley's passion for helping marginalized communities has only grown stronger.

"Everyone should have an equal voice, something guaranteed by the founding documents of our country," she said. "I want to be the person on their side who is arguing for fairness and equality."