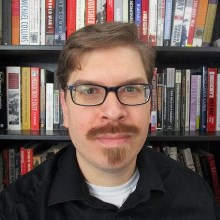 As an undergrad history major, Brandan Buck was unique among his peers. The Army veteran had four years of military experience, including one year in Afghanistan, before stepping foot on campus. His work and his research often reflected his military background. After graduating in 2009, Buck worked for the government, but he never lost his zeal for historical research.

Prior to coming to the University of Denver, Buck served in the U.S. Army (2001-2003) and the Virginia Army National Guard (2003-2005). He was deployed to Afghanistan July 2004 to July 2005. "During that time, I served as a machine gunner in an infantry platoon that provided force protection, convoy security and other combat operations," he said.

Upon completing his contract with the National Guard, he came home.

"I moved to Denver a year or so after returning from Afghanistan, desiring a change of scenery from my native Northern Virginia," he said. "I chose DU because I knew that it had a stellar reputation and a renowned international studies department," said Buck, who has a minor in international relations.

Buck attended DU using the Montgomery GI Bill for education. He excelled as a student, and was offered an internship with the National Geospatial-Intelligence Agency (NGA) before his senior year. History Professor Susan Schulten remembers his honors thesis, which examined the roots of American involvement in Afghanistan in the 1970s, as being well researched and argued.

Following graduation, Buck joined the NGA full time as an imagery and geospatial analyst. It was in this position that he returned to Afghanistan as a civilian analyst.

"I deployed on several occasions between 2011 and 2013 during which time I provided intelligence support to U.S. and Coalition special operations forces," he said. Through it all, he had an enduring desire to return to scholarship.

In 2014, Buck left NGA and government service to earn a Master's degree in history at George Mason University. He graduated in 2016 and was awarded the Josephine Pacheco Award for Best Graduate Research Paper in history that same year.

Upon successfully publishing his graduate thesis, and with encouragement from his wife, Buck pulled out his DU honors thesis, added supplemental research and reformatted it for publication. "Brokering a Buffer State: Afghan Neutrality and American Diplomacy, 1973-1979" was published in The International History Review on February 2018, almost nine years after it was completed at DU.

Today, Buck is pursuing a PhD in history at George Mason. He was recently named a Digital History Fellow at the Roy Rosenzweig Center for History and New Media.

"I am currently in a training regimen on digital history methodologies, basic programming, web design and project management. Next semester I will be placed on one of the center's valuable projects," said Buck.

"Working in digital history has been a natural transition given my background as a geospatial analyst," he added. "The fellowship is an opportunity of a lifetime, one which allows me an opportunity to contribute to a respected organization while broadening my skill base."

"For years I have been interested in the Cold War. It was during my graduate studies that I learned of the U.S. government's use of music as a soft power diplomatic tool, particularly jazz," Buck said of a paper he wrote in 2017 on Willis Conover and Global Jazz.

"I was fascinated by how the United States government presented jazz as a thoroughly American medium, one which encapsulated the relationship between individuality and teamwork in a liberal society. The Soviet Union, which actually banned jazz music in Poland during its occupation, stands in stark relief to this paradigm. Jazz became an unlikely hero, a medium which people behind the Iron Curtain used to subtly rebel and connect with likeminded people from all over the world."

After completing his PhD, Buck plans to pursue a teaching career at the collegiate level with an emphasis on Cold War and digital history. "Ultimately, considering my background and academic interests, I would like to teach at one of the U.S. service academies or staff colleges," he said, thus bringing his scholarship back to those who serve.