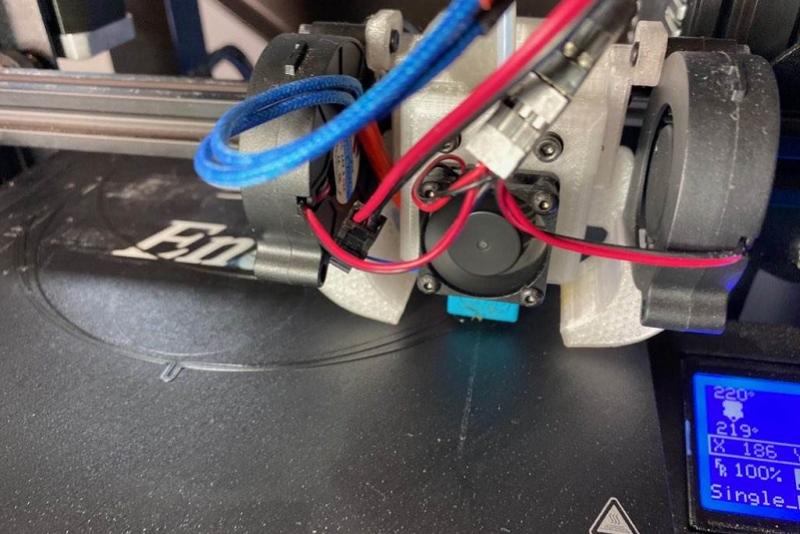 In just 30 seconds, a laser cutter carves up a sheet of polycarbonate material. Isaiah Silva fastens the transparent barrier to a piece of plastic that fits the forehead. As a final step, he snaps an elastic piece on the back, similar to an adjustable baseball cap.

The finished product is a face shield, ready to protect people on the front lines fighting the coronavirus pandemic. With the University of Denver’s resources, Silva (BS ’19) and his team of students and alumni entrepreneurs can create 200 pieces of personal protective equipment every month.

“It was very clear that this is something that needed to happen,” says Silva, an operations manager at the Innovation Labs at the Ritchie School of Engineering and Computer Science. “It’s a really terrible event that’s happening. But at the same time, I see this as being something that creates a lot of good.”

Using a design released by the National Institutes of Health, Silva and his colleagues produced 50 shields at the end of April, which they are distributing to the “second responders” staffing nursing homes. DU’s Knoebel Institute for Healthy Aging has helped identify recipients who need the shields most.

Silva first got to work last month, using personal equipment from his startup company, Atomata. “Now,” he says, “DU is leveraging our resources, and I’m able to do way more than I ever could [on my own].”

DU faculty Michael Caston and Kerstin Haring have facilitated the use of the University’s 3D printers, which have been instrumental in growing the effort as the pandemic stretches on.

“There’s some talk of a second wave or even a third wave this fall or winter,” Caston says. “I think the innovation lab is prepared to at least serve the DU community in terms of needs of PPE production. Isaiah has put in best practices and a lot of different software systems that help us expedite our progress. I’m really impressed with what he’s done.”

Also leading the charge are several DU students and alumni Ben Niesen, Jacob Goldman and Rob Paddock, the latter of whom are using the equipment from their startup company, Ahead Wind, to expedite production.

As the pandemic progresses, Silva says the team may shift its approach, recognizing that demand could shift to products other than face shields. But right now, Silva is focused on operating as a stopgap for the supply chain until it’s able to mass produce the items he’s creating at his home and on campus. When he gets stuck, Silva trades ideas with a network of similarly minded people at institutions across the country. In addition to physical distancing and wearing a mask, Silva says, 3D printing is a way he can contribute.

“It’s really just a matter of digging in and identifying what you can do,” he says. “For us, I know that we are exceptional at prototyping and rapid manufacturing. It’s awesome that we’re in a position where it’s not just DU persisting at a time like this, it’s all the universities.”