At Colorado’s most famous concert venue, the setting does its best to upstage the stars. As in rock stars. Country and jazz luminaries. Pop virtuosos. And high-wattage headliners.

No matter the act, Red Rocks Amphitheatre is a big part of the attraction. That’s true for fans, and it’s true for the musicians who play there — think the Decemberists or the Disco Biscuits or country crooner Tim McGraw or Denver’s own Nathaniel Rateliff and the Night Sweats. Any musician who dreams big wants to amp up their act at the world-famous open-air marvel.

“It’s a real bucket-list venue for a lot of bands,” says Brian Kitts, director of marketing and business development for the City and County of Denver agency that manages the venue. Of all the stops on any given tour, he adds, “this is the one [the performers] bring their families to.”

It’s a bucket-list experience for concertgoers, too. They’ve been flocking to Red Rocks since its debut in 1941, when the Civilian Conservation Corps finished construction on a design by celebrated Denver architect Burnham Hoyt. In recent years, it has emerged as the state’s top tourist attraction and its most Instagrammed tourist site. “Part of the fan experience,” Kitts explains, “is sitting out under the stars on hard rock benches in a place like Colorado.” 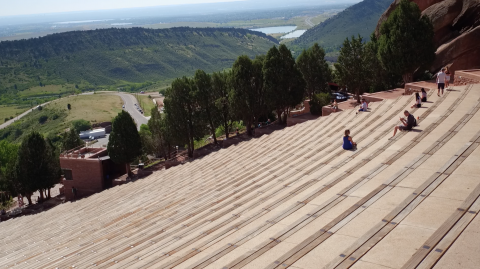 Owned by the Mile High City, Red Rocks is perched at 6,450 feet above sea level and located some 19 miles west of the University of Denver campus. As Kitts never tires of explaining, it’s one of the state’s crown jewels, an architectural and engineering feat that belongs to the people of Denver.

Whether they come for the views or the music, Denverites consider a visit to Red Rocks a respite from daily routines and stress. “People are vested in this venue. They feel like they have a stake in what happens here,” Kitts says.

And plenty happens at Red Rocks. The venue hosts its first event of the calendar year every spring, either with a sunrise service on Easter or a concert celebrating cannabis on 4/20 — “whichever,” Kitts says, “comes first.”

From there, the schedule progresses at a brisk 100-plus BPM (beats per minute), with 160 nights of concerts, movies and assorted programming over the spring, summer and fall. And each season typically makes headlines. In 2017, not long before he died at age 66, Tom Petty performed his 18th show at Red Rocks. The next year, Yo-Yo Ma chose Red Rocks for the first concert in his two-year effort to bring Bach’s complete solo cello suites to a global audience. And this year, on July 22, Motown diva Diana Ross, now 75 and sans Supremes, performed her first Red Rocks gig in 50 years. 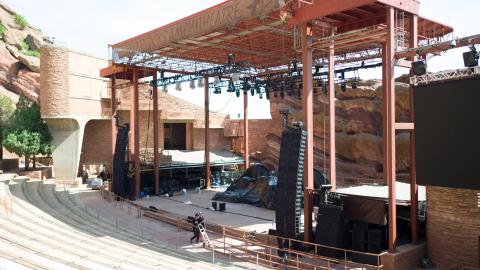 “It’s a quintessential Denver experience,” Kitts says of any event at Red Rocks. “The fact that you are [there] and it is 10 o’clock at night and you are under the stars and the moon — it’s a really moving experience.”

The venue may draw its biggest crowds at night, but during the day, it’s open to the public for picnics, exercise routines and selfie snapping. The surrounding Red Rocks Park, part of Denver Mountain Parks, offers hiking opportunities and spectacular views. Meanwhile, the Colorado Music Hall of Fame provides an introduction to the music professionals who call or called the state home. It’s located in the Red Rocks Trading Post, a short jaunt from the amphitheater. 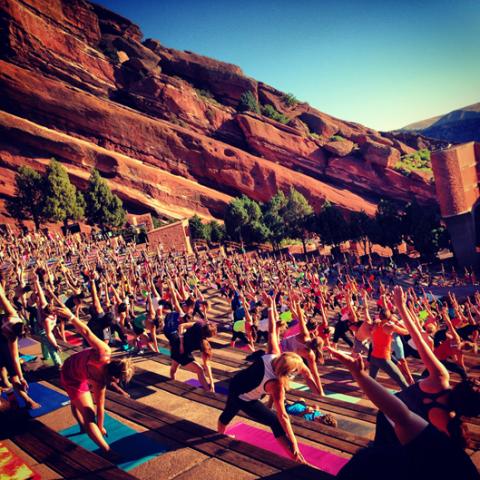 On a sprinkling of summer mornings, the venue welcomes Yoga on the Rocks, an hour-long stretch for flexible folk. And it’s not uncommon to spot student-athletes from the Pioneer varsity teams. Like so many fitness aficionados, they sometimes run the stairs just for the high-altitude conditioning.

DU students also make the occasional appearance backstage. Kitts teaches a sports and entertainment marketing class at the Daniels College of Business, and as part of the syllabus, students enjoy a behind-the-scenes tour of the venue. The highlights include a stop by the cafeteria catering to performers and their crews. It’s windowless but constructed around one dramatic red rock wall. After that, students are led through the tunnel connecting the orchestra pit to the sound and lighting booth. With walls and ceiling covered in artist signatures and sketches (a tiny rendition of a drum set, for example), it’s a watch-your-step trek through an impromptu hall of fame. 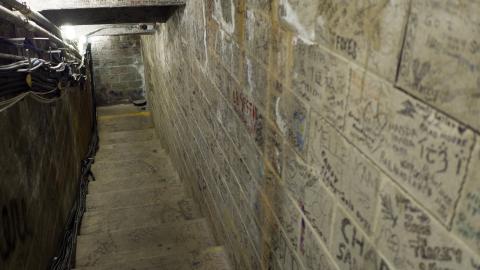 Oh what a night! Legendary moments on the Rocks

Red Rocks takes center stage in so many career biographies and fan memories. “You have literally had the history of American pop culture come through here,” Kitts says. That’s partly because of the spectacular setting, but it’s also because of acoustic magic: A note sounds the same at the bottom of the amphitheater as it does at the top.

Some memorable moments from the history books:

• The Beatles played Red Rocks on their first world tour in 1964. For reasons inexplicable to any current fans of the mop-topped Fab Four, the concert didn’t sell out, though tickets were only $6.

• After a rowdy 1971 Jethro Tull gig — “an apocalyptic show,” the Denver Post reported, “amid tear gas, unruly crowds, hurled rocks, violent police officers and a swooping police helicopter” — the city’s mayor announced that the venue would host no more rock concerts so long as he was in office. “Rock music was actually banned here in 1973,” Kitts says. “During those [five] years we had lots of Carpenters and Joni Mitchell.”

• With the release of “U2 Live at Red Rocks: Under a Blood Red Sky,” a concert film recorded on a rain-drenched June evening in 1983, an international audience discovered the venue’s scenic charms. “It’s the performance that put Red Rocks on the map,” Kitts says. What’s more, the dramatic footage — some of which was shown repeatedly on MTV — helped establish U2 and its lead singer, Bono, as a performance powerhouse.

• Sometimes at Red Rocks, the weather does its best to steal the spotlight. Earlier this year, when Florence + the Machine took to the stage on a mid-May evening, vocalist Florence Welch made the most of a classic Denver snow show. “She came out barefoot with [this] gossamer dress on and danced with snowflakes falling all around her,” Kitts says. 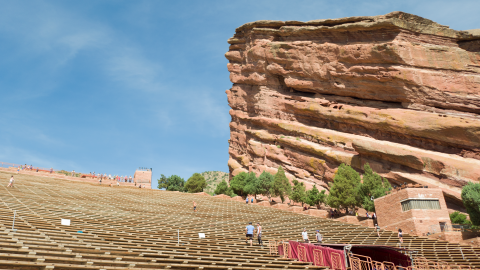 The rundown on Red Rocks

• Construction on the venue began in 1936 at the height of the Great Depression and with the support of the Works Progress Administration. The Civilian Conservation Corps provided labor for the venue, which opened to the public in June 1941.

• In the 19th century, Red Rocks was known as the Garden of the Angels.

• As any encyclopedia will relate, the walls of the venue were formed in the late Pennsylvanian to early Permian period. And Red Rocks is a stone’s throw from Dinosaur Ridge, one of the world’s most famous fossil sites.

• Widespread Panic holds the record for the most shows at Red Rocks.

• On concert and film nights, Red Rocks accommodates about 9,500 people in 70 rows of seats carved into the stone. Because it’s a historic landmark, the amphitheater has largely been preserved in its original state. “It basically looks today like it did in 1941,” Kitts says.