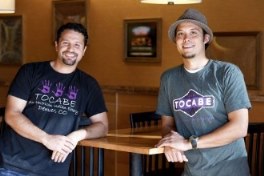 "We have a friend, Walt Pourier, who always says, 'You thrive, I thrive, we thrive.' That's the kind of mentality that we like to go by," says Ben Jacobs, co-owner of Tocabe: An American Indian Eatery.

Jacobs (BA '05, history) and Matt Chandra (BA '05, digital media studies) opened their first restaurant in December 2008. Nine years and two locations later, they're still at it, but with a bigger goal in mind—that is, to become a national Native-American-focused restaurant brand that tailors its menu to locations across the country while supporting the economic growth of Native businesses and communities.

"Native first and everything else second," says Jacobs. "What Matt and I are trying to do is grow our restaurant brand, but at the same time grow the people that we work with, so we can all be on this path together."

Friends since their first year at the University of Denver, Jacobs and Chandra have come a long way since then, from studying abroad together to starting a business together.

Though both struggled with their own learning disabilities while in school, each has brought his own unique talents and skills to the business. For Jacobs, it took the help of a dedicated mentor with the University's Learning Effectiveness Program (LEP) to see his true potential.

"My LEP advisor was the person who made me finally believe in myself. He told me, 'You can do it and you can be successful.' He believed in what I could do, and saw what I couldn't see," Jacobs says.

Neither followed a "traditional" trajectory from business or hospitality into the restaurant world. Rather, Chandra studied digital media, and Jacobs history. Yet, both utilize their degrees to further their business—just not in the way people told them they were "supposed" to.

Chandra created all of Tocabe's original branding, while Jacobs shared the history of his family and their recipes. Together, they are creating the story of their future and what they want to represent as a business and as part of the community.

The pair are "always thinking big" in their approach to the fast-casual restaurant model. As the brand expands, Jacobs says they want to incorporate local communities' ideas, foods and traditions into their restaurants.

"We want other people to bring their ideas, their traditions and their identities into what we do. There are currently no other Native restaurants trying to go as big as we are," says Jacobs. "Our belief is that everyone should help have a voice in that. We want to listen to people's ideas and build something that's created by communities across the country."

While they have found success in creating a truly unique restaurant that continues to grow, Jacobs and Chandra have realized that having a larger community impact is just as important.

They have recently become advocates for more traditional items in the USDA's Food Distribution Program on Indian Reservations, including items such as bison, blue corn, salmon, and wild rice. They give advice on the types of foods that should be provided to low-income households on Indian reservations, and recommend Native vendors to partner with this government program.

"We do this because we don't want families to go hungry," says Jacobs. "It's easy to get caught up in the culinary world and forget that we can simply feed people who can't afford healthy food."

In addition, they open their restaurant space to the community for free, supporting fundraisers, birthdays, and honors songs—much like the song Jacobs played to honor his LEP advisor after opening their first restaurant. The Stronghold Society, Denver March Powwow, Café Cultura, and many other organizations regularly hold meetings in their space.

Jacobs says that is why they are there, to provide a place for the community to gather and share cultural identity.

Moving forward, they want to continue to open their doors to the community and to all the possibilities that lie ahead.

"As Matt always says, 'This is the first of many things that we are going to do.'"