Graduates of DU's Arts, Humanities & Social Sciences have gone on to become artists, journalists, government officials, musicians, healthcare professionals, and business leaders. Some you may recognize by name, while others may not be as well known. Thousands are making an impact on their local and global communities.

In honor of Real News Day on April 27 , we sat down with alumni who are committed to seeking and presenting fair and accurate news and information that impacts our daily lives. 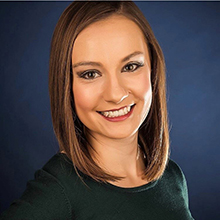 Carly Moore (BA '15, journalism studies) was inspired to study journalism by her father, a radio DJ. While at DU, Moore landed internships at Rocky Mountain PBS and FOX31 Denver where she learned how to produce TV segments and present news stories on camera. After graduation, she worked her way up from web producer to her current role as weekend evening anchor with FOX21.

Though she isn't always able to see how her work affects viewers, Moore says, "I want to be a news reporter that humanizes the news, makes it more relatable, and encourages people to be informed about what's going on in their communities.

"Lately people have distanced themselves from the media and criticized news organizations. Journalism is the only profession that is specifically protected by the U.S. Constitution. It's my job to use the platform as a way to seek the truth, expose a problem, bring awareness to an issue, and push for a way to fix it.

"My goal is not to discourage criticism, but rather, encourage people to continue to be skeptical, ask more questions, and be more critical of what they read or watch. Every day citizens should hold business owners, local leaders, government organizations, and the media accountable for their words and actions." 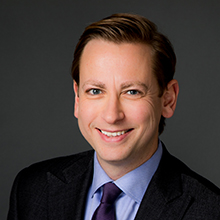 Growing up, Todd Unger (BA '07, journalism studies) was intrigued by broadcast news and knew early on it was the right path for him. A week after graduation, he started his first anchor/reporter job in Nebraska and hasn't slowed down since, now, an anchor/reporter for WFAA ABC in Dallas/Fort Worth. Unger says his career has been shaped by moments that mattered most to viewers, like the time he covered a deadly explosion in west Texas in 2013 and the 2016 ambush of five Dallas police officers.

"[As journalists] we care about the places we live just as much as the next person," Unger says. "Outside of my job, I'm a regular volunteer driver for Meals On Wheels, and have served on the local boards for the YMCA and Society of Professional Journalists. No question, my career has given me an appreciation for people living paycheck to paycheck and month to month.

"It may seem like a fool's errand, but it'd be nice to restore some credibility within the media as a whole. [Things have become] so fragmented, and the blame lies with every network, cable station, station group, etc.

"But when I look to local legacy stations, like WFAA in Dallas/Fort Worth or 9News in Denver, I see places where you're still going to get great storytelling and two sides to a story. We [journalists] are still doing a helluva lot of good work."