Activism Through Literature and Leadership 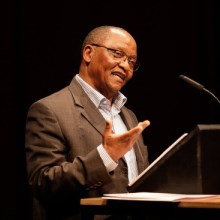 Considered among the most influential writers in South Africa, Njabulo S. Ndebele has used literature as a tool for social change while leading in the recovery of South Africa through higher education.

As a child, Ndebele (PhD '83, creative writing) was exposed to writing very early in life. His father, Nimrod Njabulo Ndebele, was a teacher and playwright who published the first isiZulu drama, UGubudele namaZimuzimu (1941). It was only natural that he followed in his father's footsteps.

In his adolescence, apartheid law permeated educational institutions and segregated schools—intended by the apartheid government to steer non-white youth toward menial labor. To escape this policy, Ndebele attended a boarding school in Swaziland where he flourished and began writing poetry.

He went on to study English and philosophy at the University of Botswana, Lesotho, and Swaziland (UBLS), at Roma in Lesotho. There, he also began to develop his own political insight as a student leader and member of the Black Consciousness Movement, an anti-apartheid activist movement.

Committed to education, writing and advocacy, Ndebele continued to accumulate extensive academic, international, and leadership experience. He attained his MA from the University of Cambridge in 1975. And, like South African writer Es'kia Mphahlele (PhD '68) before him, Ndebele pursued his PhD in creative writing from the University of Denver.

"Mphahlele's classic autobiography Down Second Avenue was a major influence on me as a young writer. So, whatever it was that this great South African writer was doing at the University of Denver was worth emulating," said Ndebele.

At DU, Ndebele was able to develop relationships with his professors and learn from other writers and teachers. Remembering the late professor John Williams, he said, "I loved that a writer of such stature and accomplishment would give such close attention to us graduate students. He was such a fount of knowledge and wisdom ... I treasure his memory to this day."

Since completing his PhD in 1983, Ndebele has used his voice for social justice as an institutional leader, public speaker, literary activist, and political critic.

As an institutional leader and public speaker, he has assumed high-level leadership positions in some of South Africa's top universities, including University of Witwatersrand, University of the Western Cape, University of Cape Town, and currently as Chancellor at the University of Johannesburg, a titular position. In recognition of his work, Ndebele has received 13 honorary doctorates from universities across the globe.

Through his leadership in higher education, Ndebele is writing a different story for a new generation of South Africans who are still struggling with the economic and systematic disadvantages leftover from apartheid.

"I have become profoundly aware of the importance of strong institutions in any successful society. Institutions wherever they are, represent a solemn agreement among those that have created them to surrender a little of themselves to the common good they have identified, defined, and committed to," he said.

As a creative writer and essayist, Ndebele uses literature as a vehicle for deepening social insight into injustice and the necessity for freedom. Over the course of his career, he has published eight books highlighting the resiliency and strength of the people of South Africa, as well as writing numerous articles commenting on South Africa's political climate and ways forward post-apartheid.

His first novel, Fools and Other Stories, winner of Africa's prestigious Noma Award in 1984, portrayed stories of South African townships during apartheid. Rediscovery of the Ordinary: Essays on South African Literature and Culture (1991) was a collection of highly influential essays as South Africa underwent a period of change and reconstruction. And, published to critical acclaim, The Cry of Winnie Mandela told the stories of five fictional women who waited for their men to return from various forms of exile. They share their stories of waiting with the iconic Winnie Mandela.

More than two decades after apartheid ended, Ndebele remains committed to ensuring Nelson Mandela's vision for a just, inclusive society becomes reality. He currently serves as chairman of the Nelson Mandela Foundation and the Mandela Rhodes Foundation, and he continues to write public commentary on the political environment. His latest book, an account of a remarkable South African township in the Eastern Cape that has produced 22 world boxing champions, is well underway.